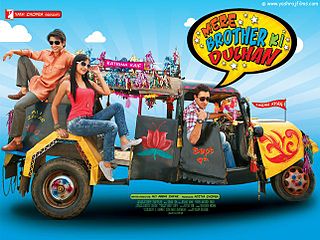 It’s not tough to guess the final outcome of Mere Brother ki Dulhan (MBKD) once you’ve read the title, seen the promos and watched the first 15 minutes of the film. But that doesn’t matter because of course, it’s the journey to the climax that counts.
Mere Brother ki Dulhan is the story of two brothers and a new woman in their lives. Fresh from a break-up with his girlfriend in London where he lives and works, Luv Agnihotri (Ali Zafar) asks his brother Kush (Imran Khan) to find him a bride. Kush zeroes in on wild child Dimple Dixit (Katrina Kaif). But before Luv returns to India to get hitched, Kush and Dimple fall in love with each other. Question is: Will they act on those feelings? And how will they extricate themselves from this complicated mess?
Debutant director Ali Abbas Zafar – who is credited with the story, screenplay and dialogues – clearly has a penchant for humour, but isn’t consistent with it here. He also appears to have instructed his leading lady to spend the entire duration of MBKD with her eyes widened to saucer size, which is fine in places, but feels over-the-top elsewhere. In an industry that tends to focus most of its time, money and skills on its male leading stars, it’s refreshing to see that this film revolves largely around Katrina. She throws herself into the role with gusto, but there’s a difference between being cute and cutesy and she crosses that line too often with her performance, which made me sorely miss director Imtiaz Ali’s handling of the madcap Geet played by Kareena Kapoor in Jab We Met. The fault here lies with the actress’ and the director’s interpretation of a female rebel: being a free spirit is not the same as being an ass. Katrina’s Dimple in several places comes across as ditsy (like her character in Tees Maar Khan last year), foolish, immature and childish, instead of alluringly, irresistibly crazy which I suspect is the intention. Having seen her in this year’s Zindagi Na Milegi Dobara, we know she’s capable of much better.
Despite this, there’s something appealing about the youthful shenanigans of the film’s lead trio. It helps that MBKD does not ask to be taken too seriously (which is why I’m willing to pretend that I didn’t notice that the placement of Dimple’s fingers on her guitar don’t match the music that’s actually playing in the background or that the routes the film’s various players take when they get to Delhi show a poor understanding of the Capital’s map). Imran and Katrina don’t share the same chemistry as Imran and Deepika did in Break ke Baad, but there’s an ease in their interactions that’s likeable. Pakistani actor Ali Zafar (who Bollywood discovered in Tere Bin Laden) has a rather studied style of dialogue delivery, but he still fits the part of the elder brother who dithers in relationships. And it’s nice to see the trouble that’s gone into casting Kush’s best buddies, Luv’s ex (newcomer Tara D’souza) and the lead couple’s parents, especially Dimple’s elegantly dignified dad who’s in the foreign service (Kanwaljeet Singh) and Luv-Kush’s army colonel father (Parikshit Sahni).
The search for Kush’s bride leads to comical situations as one has come to expect in contemporary films about arranged marriages, but MBKD does not dwell upon them to the point of repetitiveness, nor does the film mock the practice. A point is also quietly made when a creep in MBKD assumes that Dimple the rock chick would sleep with him because that’s what such women do: Luv cautions her that any woman like her will repeatedly encounter such men in India but no, that does not mean she should change. That’s a fine line to tread and Ali Abbas Zafar does it wisely and well. Having said that, I do wish that the film had not made such a point of Dimple’s smoking and drinking ways as part of the ‘liberal woman’ package – it’s almost as though Hindi filmdom is collectively convinced that every ‘liberal’ woman would necessarily be fond of alcohol. Dimple swills booze and smokes beedis, but her life’s ambition is restricted to marrying a rich guy whose money she can blithely spend.
On the downside then, too much in this film is underlined and then re-stressed in the effort to be funny. The bride’s pre-wedding panic, for instance, seems contrived. And her drunken scene atop a jeep is decidedly flat ... as are many of the references to other Hindi films (the bow to Dabangg is so forced and so planned that I could see it coming from a mile). On the plus side though, there is much in the film that is genuinely funny, my favourite scene being the one in which Kush and Luv’s ex-girlfriend Piali play badminton with Piya tu ab to aaja in the background. And unlike many films of this genre, it does not let go of its light touch in favour of mawkish melodrama in the climax.
In the ultimate analysis then, MBKD is an inconsistent film that feels somewhat like a fling – I’m not in love with it, it’s forgettable, but it was fun while it lasted.
Rating (out of five): **1/2
CBFC Rating:                       U/A without cuts
Running time:                        142 Minutes
Language:                              Hindi
Photograph courtesy: http://en.wikipedia.org/wiki/Mere_Brother_Ki_Dulhan
Posted by Anna MM Vetticad at 10:40 AM