The saddest part of watching Mummy Punjabi is the realisation that Kirron Kher deserves better, but is tragically limited by the Hindi film industry because of its narrow vision for female character actors. Equally sad is the fact that the concept of this film is very real and the basic storyline is moving. But as we all know, that is just not enough. 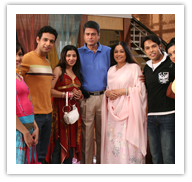 Mummy Punjabi is about an elderly couple in Chandigarh with children of marriageable age. Mom (Kirron Kher) – the focal point of the film – is an attractive and feisty busybody who spends her days trying to get brides for her two sons. For reasons that are explained only in passing, she’s not worried about her daughter at all. Dad seems to love her despite the jibes he constantly throws her way and his open condescension towards her. The film follows the mother’s efforts to plan out her children’s lives and the loneliness the elderly must contend with when their young ones leave the nest, capturing the human tendency to work towards certain goals while not watching out for the inevitable consequences.
It’s the story of lakhs of well-off Punjabi couples who send their children to the West in search of what they believe is a better life, forgetting that the US is not quite around the corner. Debutant director Pammi Somal knows Chandigarh and its people well. That’s clear right from the choice of her heroine’s name (Kher is “Baby” in the film, though everyone addresses her as “Mummyji”) to the poignance of that spacious house and sprawling lawns with no one but a gray-haired husband and wife to occupy it towards the end. But though Baby/Mummyji is a character that’s been well-thought-out, well cast and well acted, the same can’t be said of the rest of the players in the film.
Inconsistent screenplay, characterisation and casting; indifferent music; questionable production values; attention-diverting sub-plots ... Mummy Punjabi suffers from all this and more. Mummyji and her husband feel like real people. But their nosy and glamorous maid (played by Divya Dutta) comes across as a caricature. Too much footage is devoted to this irritating satellite character. Other supporting roles are played by actors with limited charisma and/or talent. And Jackie Shroff lumbers through his performance as Mummyji’s devoted suitor from her college days, with a beard and turban that seem to greatly weigh him down.
Kher has played the loud Punjabi mother so many times that I bet she knows this role like the back of her hand. She balances out her character’s boisterousness in Mummy Punjabi with some emotionally wrenching moments. Kanwaljeet (playing Mummyji’s husband) is an attractive actor who has aged with both dignity and grace. But he is hemmed in here by some very awkward dialogue writing.
Where Mummy Punjabi worked for me is in the latter half of the second half, when the couple must cope with an empty nest. The mellowing of their relationship, the companionship they provide each other, the apparent purposelessness of their lives all added up to give me a lump in my throat. Good job here, Ms Somal! I also appreciate the fact that the film adopts a non-judgmental tone towards the children: they do love their parents but are simply caught up in the circle of life and with the business of living. This is an interesting contrast to that hit mainstream film on the elderly, Baghban, in which every single one of Amitabh-Hema’s sons and their wives are painted as personifications of evil, perhaps because moderation is not as immediately attractive to mainstream viewers as extreme positions and exaggerations. Unfortunately, Mummy Punjabi takes too long to arrive at this juncture, and there’s no escaping the overall amateurish feel of this film which is trying too hard to be cute, cool and funny in too many places (right from the silly title to Mummyji’s pathetic English) and is downright stupid in parts (I barfed at the marriage bureau owner’s overtures towards Mummyji).
Worst of all, the film has been made in English, but for reasons best known to the production house, they previewed the dubbed Hindi version for the Delhi press. The mismatch between the lip movements of the actors and the dialogues we hear is exceedingly distracting in this version (cleverer translations, anyone?). But despite my devotion to duty, I could not bring myself to visit a theatre to watch this film a second time, to check if the English original is any better. Another two hours of my life frittered away?! No way!
Rating (out of five): *
CBFC Rating:                       U without cuts
Running time:                        122 Minutes
Language:                              English (a dubbed Hindi version has also been released)
Photograph courtesy: http://mummypunjabi.com/