I can’t believe that Pankaj Kapur has done what he’s done to Mausam! About one hour into the film I found myself thinking, Great job Mr K – you’ve got a winner on your hands. And then the film went on and on and on … and on and on and on … coming up with twists and turns that seemed deliberately and painstakingly contrived (no other word for it!) to keep the lead pair apart! Oh Mr Kapur, how could you have willfully spoilt what could have been a gem of a film?! 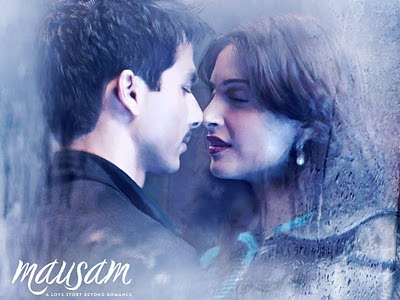 The basic story is this: Harry is a carefree youngster in Mallukot in Punjab. The year is 1992, the state is remembering to forget the ghosts of its recent terror-torn past, and Harry is surrounded by family, friends, happiness and laughter. Enter the beautiful Aayat who’s been sent to a relative’s home here by her father to escape from terror-stricken Kashmir. When Harry says to his friends one sunny afternoon in Mallukot, “Bluestar mara nahin, Ayodhya paida ho gaya,” you know this will not be a simple love story. Harry is smitten by Aayat but before she can reveal her feelings to him, she leaves Mallukot without a word. The years pass, they meet, they part again, and the cosmos seems to be plotting against them. Mausam takes us through a decade in India’s communal calendar – the demolition of the Babri Masjid, the Mumbai bomb blasts, Kargil, the Gujarat riots – and global events that keep two young lovers apart. 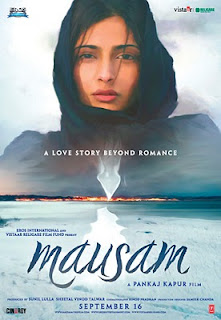 I can imagine what debutant director Pankaj Kapur was striving for in this film – an epic tale of star-crossed lovers torn apart by historical events, at the scale of Dr Zhivago. Perhaps as a tribute to David Lean’s classic, there’s even a scene in Mausam in which Harry on a moving train spots Aayat outside while she fails to see him. But Yuri Zhivago and Lara were separated by credible circumstances and events that flowed naturally and believably. Many of the developments that keep Harry and Aayat away from each other, however, seem to arise from their own foolishness or the scriptwriter’s lack of imagination. The first part of the film in Mallukot is well-written and well-directed, but years later when the couple are re-united and Aayat explains to Harry the reason for her disappearance, all I could think was: “And you couldn’t have just walked over to his house and told him that back then?!!!” Too many coincidences, too much happenstance … calls don’t get connected, people aren’t at home just when the protagonists phone them, people don’t try again if they get an answering machine the first time … I could have forgetten all those in the tenderness of Harry and Aayat’s final coming together IF the director had not then proceeded to stretch the story even further with a baby and a white horse that is meant to be symbolic but really looks quite silly! And nothing, yes nothing, screams out a director or producer’s lack of confidence in their product more than a song-and-dance at the end that’s in complete contrast to the mood of the entire film.

But let me dwell on the loveliness of the first hour of Mausam for a while. The languorous, old-world romance between Harry and Aayat is so appealingly different from the frenzied pace of love we’re more used to seeing in Hindi films since the 1970s. The couple are rarely shown touching, but when he sees her on an upstairs balcony in her home, he caresses her shadow that falls on the wall below. In the first real ‘conversation’ they have, they write notes to each other while seated in the same room, because they don’t want to awaken his sister who is lying fast asleep between them. There’s energy, humour, poignancy and pathos in that tightly executed first half, and actors Shahid Kapoor and Sonam Kapoor carry it through with conviction.

Shahid is completely, utterly loveable as the chirpy, youthful Harry with not a care in the world. But he doesn’t quite manage to pull off the more intense, older Squadron Leader Harinder Singh in later years, despite some very subtle make-up changes that add a few barely noticeable lines to his forehead to signify the passage of time. Sonam as Aayat is given barely any meat to sink her teeth into, but within those limitations she sustains her part throughout, playing a diffident yet mischievous girl in the first half and the tragic woman in Part 2. 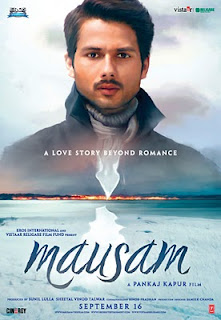 A word about Shahid’s moustache in his Air Force officer avatar – doesn’t work! If the team was looking for a way to make that likeable boyish face appear older, they should have opted for the stubble and then beard he adopts right towards the end.

At a political level, the film starts off on solid ground but ends on a whimper. By making Aayat a Muslim, Mausam bravely makes the point that terror has affected the lives of everyone in Kashmir irrespective of religion. But unlike director Onir’s beautiful 2011 film I Am that takes a tough position on the misfortunes of Kashmiri Pandits and Muslims, unlike that lovely Dharm in which Pankaj Kapur played a Hindu priest who adopts a child without realising that it was born of Muslim parents, Mausam plays it safe. Considering that there are many right wing elements in our society who believe Godhra was a justification for the Gujarat riots, Mausam’s decision to skip Godhra entirely and jump straight to the Gujarat riots feels like a cop-out, providing fodder to fundamentalist Hindus who accuse secular, moderate Hindus of being apologists for the Muslim community. Forget that tricky question, Mausam even pussyfoots around the communal divide between our lead couple – we are told that her father worries because Harry is a Punjabi and Aayat is a Kashmiri, not because of their religious differences. Oh c’mon, after the Saif Ali Khan-Kareena Kapoor-starrer Kurbaan in 2009 in which a man frankly raises concerns about his prospective son-in-law’s religion, such gingerly behavior from Mausam appears odd.

So on the assets side of its balance sheet, Mausam has an attractive lead pair with good on-screen chemistry, a strong supporting cast, two good songs (Rabba main toh mar gaya oye and Saj dhaj ke), lovely locations (from rural India to Scotland and Switzerland), and striking cinematography. Its liabilities are a screenplay that weakens as the film moves along, self-indulgent direction and its unnecessary length – no, we didn’t need to see that Mozart concert or Aayat taking ballet lessons or all those extreme close-ups! What a lost opportunity Mausam is!

Posted by Anna MM Vetticad at 9:10 AM