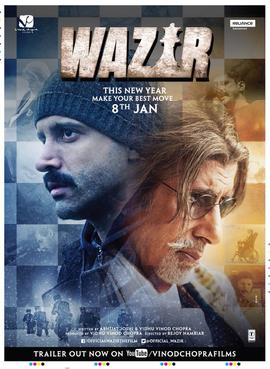 It is ironic that Wazir feels like a quickie at the writing desk. I say ironic because at the premiere in Delhi, producer Vidhu Vinod Chopra announced that it had taken 6 years to write this film; and director Bejoy Nambiar further informed the audience that the seed of the story had been conceptualised by Vinod 35 years back when Bejoy was a one-year-old.

Oddly enough, despite all the time spent on it, the cornerstone of the script is a shunya. (Warning: some people may consider what follows a spoiler.) Here is a fundamental point: if you are so evil and conscienceless as to be capable of multiple murders and also capable of murdering your only eyewitness’ only confidant, why would you risk letting that eyewitness herself live? She is, after all, a ticking time bomb.

I asked my companion at the preview this question. She replied: the murderer needed the eyewitness alive to keep alive his pretence of being who he is. Counter: no he did not; once he had established that pretence, the eyewitness could very well have slipped on a banana peel, fallen down a flight of steps, been struck by a fatal disease or been the victim of any similar carefully contrived ‘accident’ or ‘natural cause’. (Spoiler alert ends.)

Poof! There goes your entire edifice.

Readers won’t understand the full import of the previous three paragraphs until after watching the film. Point is, the basic premise of this political thriller is ill conceived and hollow.

That is a crying shame, because Wazir features some important positives.

This is a story of two parents connecting over a shared loss. Farhan Akhtar plays a dutiful Delhi policeman called Daanish Ali mourning his child’s death and the strain this places on his relationship with his wife, the Kathak dancer Ruhana (Aditi Rao Hydari). Amitabh Bachchan is the chess guru, Pandit Omkarnath Dhar, whose daughter died tragically.

Although Wazir falls flat on its face as a thriller when you consider the question posed earlier in this review, it does work in other departments.

First, its initial half hour is energetic without being hurried, neatly handled, taut and very very poignant. The remarkably well-filmed shootout in that portion is especially worth mentioning. Bejoy, he of Shaitan and David fame, is good at this stuff. Remember the exquisitely executed sequence of chaos and gunfire set to the classic song Khoya khoya chand in Shaitan?

Second, fatherhood and husbandhood, not of the authoritarian variety, but of the emotionally invested kind, are not adequately covered by mainstream Hindi cinema. It is therefore both moving and refreshing to see the exploration of Daanish and Omkarnath’s agony, and the manner in which they lean on each other for solace.

There is more to men than bombast and fisticuffs, you know, Bollywood. Men can express feelings without screaming and delivering speeches. Men can love without being stalkers and pests. Men ache for their wives. Men too cradle their babies in their arms and hold them to their bosoms. Men have bosoms. Men feel hurt. Men weep.

In this context, Farhan is a particular joy to watch as Daanish. His character is brimming with emotions yet the actor’s performance is restrained. As it happens, he looks lovely too.

Amitabh – in a departure from his immersive turn in his last screen outing Piku – unfortunately chooses to play Amitabh Bachchan rather than a character in Wazir. Still, one of the high points of the film is seeing him in the closing song shot on the two male leads in a recording studio, when you cannot help but be aware that you are witnessing a legend at work, relaxed in the company of a younger artiste and enjoying himself so thoroughly while he is at it.

Aditi has little to do beyond look great and look vulnerable in the film. She does both well, but the woman who starred in Delhi 6, Yeh Saali Zindagi and London, Paris, New York deserves better. Manav Kaul, an otherwise excellent actor, suffers the worst of the film’s writing, playing a politician called Yezaad Qureshi with glaringly obvious motivations.

The grand surprise of the film, the titular character, is nicely acted by Neil Nitin Mukesh. Why on earth does this young star not do more films? 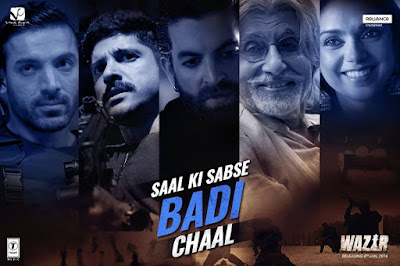 As for the rest, well, Wazir has polished production values, very attractive art design, pretty – even if too many – songs and it briefly travels to a state that we ought to see more in our films, Jammu and Kashmir.

Considering that Vinod is the producer of Lage Raho Munna Bhai (one of the best, most cerebral commercial Hindi films ever made) and 3 Idiots (one of the Mumbai film industry’s biggest box-office successes till date), and considering that his co-writer here is Abhijat Joshi, who has been a co-writer on Lage Raho, 3 Idiots and PK, the glaring plot loophole in Wazir is thoroughly disappointing. It is disappointing too that the truth about the film’s third father-daughter relationship can be seen coming from a mile. Both elements combined make the second half of Wazir far far less intriguing, intelligent and engaging than the first.

Still, Daanish’s quest for the Wazir makes for an interesting ride. The selling point of the film though, is the bonding between Daanish and Omkarnath, two grieving fathers, two husbands in pain. We need more of that from Bollywood.

Rating (out of five): **1/2
This review has also been published on firstpost:
http://www.firstpost.com/bollywood/wazir-review-amitabh-bachchan-farhan-akhtars-endearing-relationship-overrides-the-films-flaws-2575792.html