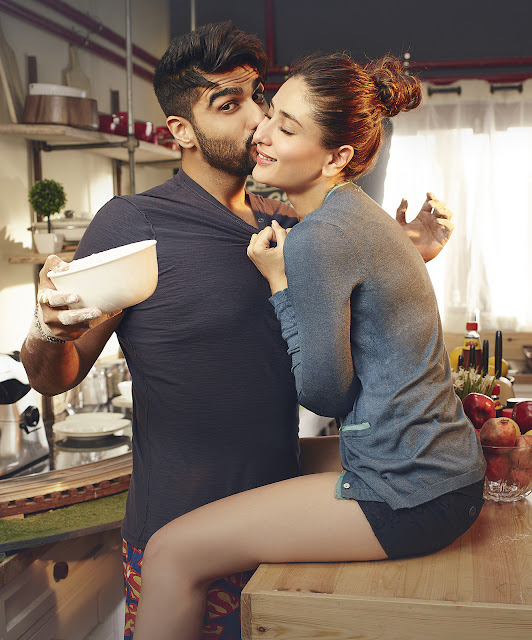 What would happen if a couple reversed socially accepted roles within their marriage? Would their relationship survive societal opprobrium, ridicule and personal insecurities if he were to be a stay-at-home spouse and she the breadwinner?

These questions that form the starting point of Ki & Ka are no doubt intriguing. They are ever relevant too, in a world that upholds stereotypical gender roles within households, with horribly regressive expressions such as “she wears the pants”. India has its own backward vocabulary, like that pejorative term for a man who has the courage to cock a snook at convention and live in his in-laws’ home: ghar jamai.

The latter phrase comes up in Ki & Ka starring Kareena Kapoor Khan as Kia, an ambitious and successful young marketing pro who feels marriage is designed to destroy women’s careers by placing the onus of household management on the wife. When she meets Kabir (Arjun Kapoor), whose sole goal in life is to run a house (or be the “artist” his mother was, as he puts it), it is a perfect fit.

They fall in love. They marry. He cooks, cleans and supports her from home. She becomes a VP in her company and supports him financially. Cracks appear. Tensions arise. They fight. They make up. They move on.

The plot is not unconvincing. After all, unspoken power equations in most homes are governed by who earns money and who does not. Many of the individual episodes in the film are independently believable in the way they deal with the rarely explored, tricky territory Kia and Kabir are treading.

It is imaginable, for instance, that Kia would initially be embarrassed to tell her colleagues that Kabir is a househusband. Many modern-day stay-at-home wives struggle with the perennial question, “What do you do?” Similarly, it might indeed be awkward to handle “what does your husband do?” when he does not do what is socially expected of him.

There is plenty of humour too in the film, especially in the first half.

Where Ki & Ka suffers is in the narrative’s failure to weave each of these passages smoothly together. The result is a patchy, episodic feel.

Something like this. (Spoiler alert!) Episode 1: boy explains notion of their proposed relationship to girl (ergo, to audience) and establishes his liberalism. Episode 2: boy and girl meet each others’ parent/s. Episode 3: boy establishes his prowess in running house. Episode 4: boy is seen in scenarios usually populated by women in films and real life, such as kitty parties and afternoon shopping sprees. Episode 5: financial scare. Episode 6: pregnancy scare. Episode 7: fissures. And so on.

The film is so taken in by its concept that it rarely rises above it to become a fully fleshed out story about fully fleshed out people. This is in keeping with adman-turned-writer-director R. Balki’s body of work so far. He is a concepts man.

After the success of his first film Cheeni Kum, a smartly done older-man-younger-woman romance, Balki has been favouring concepts and gimmicks over stories and soul. His second film originated when he was struck by the thought of casting Amitabh Bachchan as the screen son of a character played by his real-life son. The outcome was an awkwardly executed Paa in which Bachchan Senior was a child with progeria, a rare genetic condition with symptoms resembling aspects of ageing, while Abhishek Bachchan played his Dad. Shamitabh followed, in which the Big B starred as a down-and-out actor lending his voice – yes, that famous baritone – to a mute acting aspirant (Dhanush). It was a tiresome testament to Balki’s Bachchan fanhood which, by the way, he has brought to this film too. The latest concept he has latched on to is gender role reversals.

It is unfortunate that a film taking a progressive position on man-woman relations should resort to clichés to elicit laughs, possibly to soften the blow to members of the audience who might be uncomfortable at the sight of a mainstream male star playing a stay-at-home husband. There can be no other explanation for visual imagery like Kabir wearing a mangalsutra on his wrist or Kabir in red high-heeled shoes in the closing song, High heels te nachche. What is that if not another version of the “she wears the pants” triteness?

Besides, to emphasise a point, Ki & Ka also sporadically gets characters to do and say things that are completely out of character. For instance, Kabir’s father’s aggressive, unkind reaction to their announcement of marriage is credibly handled, but Kia’s mother’s initial comments seem contrived. She asks him if he is a freeloader, a query that seems solely planted in the script to give Kabir an opportunity to ask her if she would have asked the same question to a prospective bride of a hypothetical son if the girl had expressed a desire to be a stay-at-home wife. I’m not saying a potential mother-in-law would not behave in this fashion. Point is, this conversation is inconsistent with this particular potential mother-in-law’s characterisation since she later turns out to be a genuine, out-and-out liberal, possibly more so than Kia.

Also, who are these Indian parents who seem to appear only in Hindi films to ask their daughters and future sons-in-law to their faces whether they have had sex because it’s “important before commitment”? It is as if the filmmaker is screaming into our faces: Look, look, see how cool I’ve made this Mommy! But wait, she’s a social worker. Phir toh that explains everything, no?

In its denouement, Ki & Ka draws some rather simplistic conclusions about gender oppression. Still, it would be unwise to brush this film aside, since a lot of its messaging is positive and radical, not just by Bollywood standards but by Indian social norms at large. Whatever be Ki & Ka’s follies, it is still interesting that a mainstream filmmaker thought it fit to make a film with commercially successful stars about a man who wants to be a stay-at-home husband and his careerist wife.

Kareena is the pick of the cast. She is particularly good in her emotionally over-wrought scenes. It is such a joy to see her playing a substantial role after a string of marginal parts in male-centric films. It is also nice to see her deservedly getting top billing in the credits, which is uncommon for women in Bollywood even today, except for the female leads of heroine-centric films.

Ki & Ka’s camera team and lighting technicians though have done the actress a great injustice. So many clear views of her bleached facial hair? We are not supposed to notice that, people! A word about Kia’s wardrobe. After 2014’s Bewakoofiyaan starring Sonam Kapoor and PK with Anushka Sharma, here’s another film that hits the nail on the head with its styling of a female professional.

Arjun’s brooding intensity is always attractive, but he has delivered better performances in the past. Hats off to this youngster though for his experimental chromosome, which has led to the wide variety of characters he has notched up in his filmography in just a four-year-long career.

Swaroop Sampat, who plays Kia’s mother in Ki & Ka, is cute and likeable but she just cannot act. It does not matter, because her presence in the film brings up a wave of nostalgia for a childhood spent viewing Yeh jo hai zindagi on TV with the family every Friday.

The production design too is noteworthy. If you are a train buff, you might want to watch this film simply for the manner in which Kabir redecorates his house.

Increasing numbers of Indian women are refusing to throttle their professional ambitions in favour of managing a home, while a minuscule number of Indian men are opting to take on roles traditionally deemed to be a feminine preserve. In this scenario, a romcom on a stay-at-home husband is very pertinent. Large swathes of Ki & Ka are fun, considerable sections of it are unexpectedly broad-minded, path-breaking for Bollywood and insightful. The problem is that we can section it off in this fashion. Ultimately, what fails the film is its mixed messaging and choppy texture.


This review has also been published on Firstpost:
http://www.firstpost.com/bollywood/ki-and-ka-review-arjun-kareena-power-through-but-the-film-tries-too-hard-to-be-cool-2706762.html


Song video: https://www.youtube.com/watch?v=N_KpjLhJa1k
Posted by Anna MM Vetticad at 10:38 AM