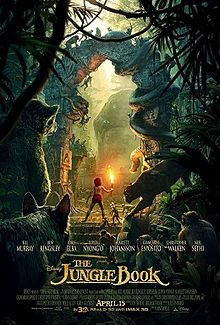 In a sense, Gulzar and Vishal Bhardwaj have spoilt The Jungle Book for me. It is impossible for at least some of us Indians to watch any screen visitation of Rudyard Kipling’s 19th century literary classics of that name without being filled with nostalgia for the old Japanese animated TV serial that has been dubbed in multiple Indian languages. The Hindi version telecast on Doordarshan in the early 1990s featured that song as its title track.

Remember Jungle jungle baat chali hai with original music by Vishal – back when the nation barely knew his name – and lyrics by Gulzarsaab?

This is a Catch-22 situation for any non-Indian viewer because you cannot possibly appreciate  the rambunctiousness of the number without understanding the un-understandable: lyrics that say  nothing more than, “It has become known across all jungles that a flower has blossomed wearing underwear… A little bird is embarrassed, because it is naked. It was better off inside the egg and so it’s wondering why it bothered to emerge… A flower has blossomed wearing underwear.” (For complete Hindi lyrics, see footnote.)

It is with such formidable competition etched in our collective memories that this new Disney live-action-plus-CGI film comes to India. Jon Favreau’s retelling of the story of a human child brought up by wolves in an Indian forest is grimmer, less frothy and more adult than the aforementioned, much-loved TV series and Disney’s own animated 1967 version. Still, this Jungle Book has its own allure.

Mowgli (played here by Indian American debutant Neel Sethi) was found in the jungle as a baby by the kind panther Bagheera (voiced by Ben Kingsley). He has been raised by the loving wolf Raksha (Lupita Nyong’o) in a pack headed by the wise Akela (Giancarlo Esposito). Mowgli’s nemesis in the jungle is the human-eating tiger Shere Khan (Idris Elba) who hates him for reasons yet unknown until the second half of the film.

An unexpected turn of events takes Mowgli to another part of the forest where he meets the giant python Kaa (Scarlett Johansson), befriends the lazy sloth bear Baloo (Bill Murray) and clashes with the devious, power-hungry, orangutan-like Gigantopithecus, King Louie (Christopher Walken).

Like the original story, this film too is choc-a-bloc with lessons about life, the law of the jungle, peaceful co-existence with nature, mutual respect, teamwork, the inventiveness born of human imagination and basic decency. It is not overtly didactic though, and allows viewers to swim along with the narrative, gathering whatever messages we may choose to pick by the way without having any of them stuffed down our throats. Such as the oft-repeated mantra, “…The strength of the pack is the wolf and the strength of the wolf is the pack,” and so much else.

The plot has been pared down considerably from the 1967 version, with a very – interestingly – different ending.

The primary selling point of The Jungle Book is its dazzling CGI, which is used to lend amazing depth and detailing to the depiction of the jungle and the beasts. The elephants are a majestic presence, completely justifying Bagheera’s awe-inspired reverence towards them. Bagheera himself is suitably intimidating while Baloo is absolutely loveable. Shere Khan and Kaa are terrifying, and Louie is a nightmare-inducing yet not repulsive fellow.

Parents please be warned: This is a sombre film and some of the fight scenes could be genuinely frightening for under-10s, which should explain the much-criticised UA rating awarded to it by India’s Central Board of Film Certification. (For my column on the subject on Firstpost, click here.)

Another note of caution: While the 3D is worth every paisa paid for your ticket, much of the action takes place in the night, which puts a bit of a strain on the eyes since most Indian screens seem dim and dark, in any case, in 3D. That being said, the film’s impeccably timed, edge-of-the-seat action makes it as much a nail-biting, chilling thriller as it is a fantasy adventure.

All the special effects would have come to nought though if it weren’t for the voice cast who are brilliant while delivering their dialogues. Lupita Nyong’o brings great emotional depth to the role of a surrogate mother torn between wanting her child by her side and wanting what is best for him. As for Christopher Walken as Louie, he is pure genius here. The voice cast’s speaking portions are so well done, that they can almost be forgiven for some of their indifferent singing.

The film not just falters in the music department, it trips, falls and is badly bruised. While Bare necessities – resurrected from the 1967 film – is used very effectively here in the background score, its tepid rendition by Neel Sethi and Bill Murray made me weep in remembrance of the up-tempo, full-bodied singing from that earlier film.

Ditto Louie’s I wanna be like you: dull here, so lively and memorable back then.

Scarlett Johansson saves the day with her jazzy, sensuous, ruminative take on Trust in me – don’t walk out when the credits start rolling, or you will miss it. It is one of the nicest parts of the film.

Twelve-year-old Neel bears the burden of being the only live human actor on screen in this film. He is a mixed bag: a competent actor, sweet, likeable, yet not take-your-breath-away charming. He lacks clarity in speech as a result of which I found myself struggling to figure out his words, especially the proper nouns, in the film’s initial 15minutes.

It is hard to write about a child actor, because you worry as a critic that the kid might be reading you. Hopefully, his parents have been sensible enough to keep him away from reviews.

One question: why are Indian characters in Hollywood films still saying Indian names with a colonial-era pronunciation? Hollywood has evolved beyond the stage when white actors used to play Indians because producers could not be bothered to cast Indian actors in those roles (sample: Peter Sellers as Dr Kabir in the 1960 film The Millionairess). In a more enlightened world, the most widely viewed film industry on the globe is making a concerted effort towards better representation, #OscarsSoWhite was a widely discussed campaign and actors of different races are being sought out to play characters of those races (such as our very own Priyanka Chopra and Irrfan).

In this scenario, it is hard to understand why actors could not have made the effort to say Sheir Khan (rather than Share Caan), Akeyla (not Akeela) and Baaloo/Bhaaloo (not Berloo). What next? A contemporary British film in which characters say Cashmere instead of Kashmir, Mirat for Meerut and Cawnpore for Kanpur? C’mon Disney, it’s 2016! You should do better than that.

This is possibly more troubling because writer Justin Marks and director Jon Favreau’s take on The Jungle Book is pointedly about inclusiveness and acceptance, especially with its choice of ending. It also emphasises the need for all creatures to be non-judgemental towards other species. Note, for instance, the wolves’ finely nuanced condemnation of Sher Khan – not for eating flesh, but specifically for killing as mere sport.

Such subtlety, among other reasons, is what makes this an appealing film.

The Jungle Book is too flawed to be among Disney’s best works of animation or live action set in the animal kingdom. That crown, when sparingly given out by this blog, must go to The Lion King (1994). Still, this film is thoughtful, thought-provoking, visually spectacular and features some A-grade voice work. It is also a significant part of Disney’s journey if you consider the lightness of the 1967 film and how much heavier this one is. The two interpretations are as different as night and day. That does not make this a lesser film. Just different in an interesting way.

Here are the complete lyrics of Jungle jungle baat chali hai by Vishal and Gulzar:

For a further wave of nostalgia, listen to the original song here:
https://www.youtube.com/watch?v=k9RVgTX55vo

And this is a redone 2016 version of the song for the Hindi trailer of Disney’s The Jungle Book: https://www.youtube.com/watch?v=RnO1usyMyEo Not quite as nice as the original but, well, in addition to the child singers, this new video also features Vishal and Gulzar. Oh my poor heart, it just skipped a beat!