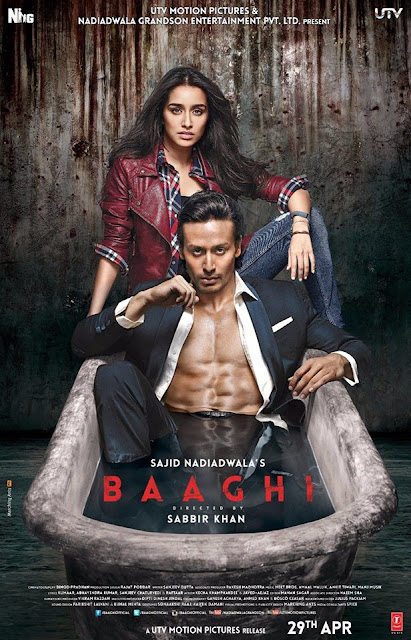 Baaghi is a slickly packaged empty vessel. The action choreography is striking, the locations are exquisite, the camerawork polished, the art design impressive, the cast well dressed. Scratch the attractive surface though, and you get a dated, cliched storyline that compartmentalises hero, heroine, villains and comedians in the way Hindi films of the 1970s and 1980s did.

The story begins in the menacing Bangkok den of a rogue called Raghav Shetty, who is on the lookout for Sia Khurana. Cut to Hyderabad, where she is shooting for a film directed by her Daddy, when the numero uno baddie’s goons abduct her. Martial arts expert Ronnie Singh is called in to rescue the damsel in distress. Ronnie and Sia have a past. Time for explanatory flashback.

Cut to Kollam railway station in Kerala where boy and girl met, girl pretended to resist boy, they fell in love, fate split them up, reunited them, Raghav split them up again and so on.

It is a formula that is so dull and dusted that even Sunny Deol has stopped revisiting it.

Baaghi’s writer Sanjeev Dutta seems to have a thing for antiquity though. This is the sort of film where the hero is omnipotent and successfully bashes up dozens of men single-handedly, as did male leads of pre-1990s Hindi cinema who sought to replicate and cash in on the success of Amitabh Bachchan’s Angry Young Man formula. Here, like it was back then, the heroine’s only role is to be good-looking, charming and if possible dance sweetly/sexily enough to make the hero fall in love with her, thus providing him with a motivation to bash the bad guys in the end.

The villains here too are uni-dimensional cardboard cut-outs. Comedians are slotted in to relieve tension even in the middle of a hectic chase. Love happens at the first sight of a pretty face who fakes disinterest in the hero though of course she is keen on him because, well, you know, after all he is the hero. What else was she created for but to fall for him?

Besides, do we not also know that when a woman says “no” she means “maybe”? Ronnie, an absolute stranger who just met Sia a few minutes back on a train, blows a kiss to her from a station platform. She shows irritation but turns away to hide a smile. This film may not be as aggressive or overt as the song Koi haseena jab rootth jaati hai from Sholay, Jumma chumma de de from Hum, Jumme ki raat from Kick or Tu hi to hai from Holiday, but it does make that regressive point all the same.

The film’s only USPs are its only novelties. First, it is set almost entirely in Kerala, which translates into an eyeful of stunning locales, the famed snake boat race (vallam kali) in scenic backwaters and miles of greenery all around. Second, Ronnie is in Kerala to learn the state’s traditional martial arts form Kalaripayattu, which has a way of transforming men into Rudolf Nureyev and Birju Maharaj while they smash and slice other human beings to bits.

Tiger Shroff as Ronnie gets the bulk of the film’s fights and has clearly worked hard to learn Kalari. Many points to him for that and what he has achieved with his body. He must, however, control the tendency to pose about, which is never more evident than in scenes where he replicates his Guru’s moves and comes across as a mannequin, while the old man looks like a battle axe and a ballet dancer rolled into one.

In terms of acting, Tiger’s exaggerated expressions are one with the film’s penchant for overstatement. To be fair, he seems like he would do better with better direction, even if it is hard to ignore the fact that his Caucasian facial features make him a bit of a misfit in Indian cinema. He absolutely does not look Punjabi, although that is what he is meant to be in this film; he looks European. Perhaps he will figure a way around that.

And while I’m all for men showing off their beautiful bodies on screen, could someone explain why so many Hindi film heroes these days make it a point to rip off their shirts before a fight? Sure they look good, but is there a scientific logic here that has escaped me? Just asking.

Shraddha Kapoor as Sia is well turned out and gets a couple of fight scenes of her own. It is nice to see the actress throwing punches and kicks with such elan. Her acting in the early scenes though, is over-cutesified. Time to cross over into the adult world, girl. You are too good to waste yourself playing and replaying a child-like innocent who is an appendage to the hero.

Of the remaining performers, Sudheer Babu Posani merits a mention for his Kalari moves as Ronnie’s bête noir Raghav Shetty. It is curious though that Sudheer, who is a Telugu actor, manages his Malayalam diction so poorly in the film. He keeps addressing his father as “Aachan” when it should be “Achchan”, a word that even a north Indian might easily get right if you point out that the “chch” is pronounced precisely as it is in Bachchan. Simple, no?

Veteran Sanjay Mishra and Sumit Gulati (who we saw last year in Talvar) enter the picture at one point to provide what is conventionally called “comic relief”. If a blind man bumping into things or mistakenly feeling up a woman’s legs makes you laugh, then the director has got what he wants. Some people, hopefully, have better taste.

Director Sabbir Khan made his debut with Kambakkht Ishq in 2009 starring Kareena Kapoor and Akshay Kumar, which he followed up with Tiger and Kriti Sanon’s debut Hindi film Heropanti in 2014. Both films revealed his love for bombast.

In Baaghi, he adds to his shoulders the burden of targeting Salman Khan and Akshay’s traditional audience. And so, Tiger is given an old-style punchline to repeat through the film: “Itni bhi jaldi kya hai? Abhi toh maine start kiya hai.” (What’s the rush? I’ve only just begun.) It is hard to imagine why the producers thought this ordinary writing would be as memorable as, say, Salman’s “Ek baar jo maine commitment ki, toh apne aap ki bhi nahin sunta” (Once I make a commitment, I do not allow myself to hold me back) or that Tiger has the panache to elevate it.

More triteness comes in the form of Baaghi’s effort to cash in on the prevailing tension between India and our neighbour China, as Hindi cinema once did with Chinese-looking villains around the time of the 1962 war or before that in the just-post-Independence era when seemingly Western Roberts were the bad people. Here, Raghav’s henchman Yong tells Ronnie: “You killed my brother, you Indian. You think you can fight? We fight. Chinese fight.” Ronnie beats him to pulp before replying grandly, “Sorry, China ka maal zyaada tikta nahin hai” (Chinese goods do not last long).

Might as well have gone a step further with a crowd-pleasing, sarkar-pleasing “Bharat Mata ki jai!” yelled out by the hero. The chest-thumping suits the film’s emptiness. Gloss sans substance tends to make a lot of noise.