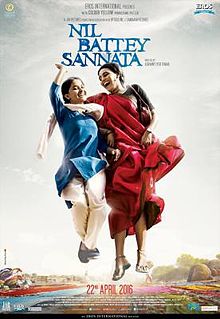 A struggling single mother, an only child who takes her for granted and a supportive employer – three bright women lie at the heart of this film by debutant director Ashwiny Iyer Tiwari.

Nil Battey Sannata is a reminder that there is no such thing as a life less ordinary. We are, after all, the heroines of our own existence. Writers who plagiarise are clearly not looking around them. If you must lift an idea, lift from life. Chanda Sahai is not the sort of person who would attract a second glance if she passed us on a street. Her sweet face is overshadowed by drab saris and a boring hairdo. Yet Tiwari, her co-writers Neeraj Singh, Pranjal Choudhary and Nitesh Tiwari stopped, not just to take a look but to weave an entire screenplay around her.

It is a good thing their collective imagination did not go in search of the millionaires, billionaires and bhais that Bollywood is so pre-occupied with. In telling us the story of a bai (housemaid) instead, they have ended up creating a unique, inspiring and exceedingly moving Hindi film.

Like many impoverished mothers, Chanda works relentlessly to make ends meet, holding down multiple jobs to supplement her income as a maid in Agra. Her daughter Apeksha a.k.a. Apu barely notices her labours though. Apu is in Class X and has been scraping through all her tests so far. With Mathematics, she does not even manage that (hence the song Maths mein dabba gul, meaning: useless in Maths) and Chanda fears the subject will cause her to flunk her finals.

The lady of the house where Chanda works, the kind Dr Diwan, suggests that she return to school herself, in fact to the Xth (the class she failed as a student) in Apu’s school. This would put her in a position to help Apu with her work and also monitor her.

The film takes us through the ensuing tension between mother and daughter, the effect of the increased demands on Chanda’s time and how this decision alters the course of their journey.

Nil Battey Sannata literally means zero divided by absolute silence, stillness and desolation, which is a mathematical metaphor for hopelessness or an existence that could amount to zilch. Chanda is determined that she and Apu will add up to more than that.

It is a charming tale told with good humour, sensitivity and confidence. The characterisation of both the leads and the supporting players – including Apu’s classmates – is richly layered and plausible. They all come across as real people from a real world.

Even Apu’s extreme nastiness towards Chanda is straight out of reality. Is there a kid out there who has never ever been hatefully mean to a sacrificing, loving parent?

The team of Nil Battey Sannata wisely recognises that there is no need to artificially heighten the drama in their film when life is a drama in itself. The result is a minimalist directorial style that is apt for the realistic story at hand. Both are complemented by a background score so gentle that you could forget it is there. Just as you forget cinematographer Gavemic U. Ary’s camera that is self-effacing and self-erasing to the point that a viewer might believe she has herself entered the frame and is watching Chanda and Apu from the margins of their lives.

The film does falter occasionally. First, the girls-are-not-good-at-Maths stereotype is stated as a truism by a seemingly liberal character. The continuing worldwide prejudice against women in STEM (Science, Technology, Engineering and Mathematics related professions) is not an imagined problem and it hurts when a sensible film casually perpetuates gender typecasting.

The other off-key point comes in the end with Apu’s response to the question of why she wants her chosen profession. Her answer is rather thin and poorly thought out. Surely the idea is not to belittle bais but to have worthwhile goals and sound, specific reasons for zeroing in on them.

Besides, the ode to mothers in the climax is out of sync with the rest of the film’s non-schmaltzy tone. There are plenty of crappy parents (mothers included) out there. The point should be to acknowledge great parents because they are great, not merely because they happen to be parents.

These portions are especially jarring because they rear their heads in an otherwise lovely venture.

The film’s dialogues, for instance, are uncommon on the Bollywoodscape. There is a lyricism to the language these characters speak and Chanda’s vocabulary in particular. While the use of “bai” may have been more convincing in a western Indian setting, it is not unknown in north India with this meaning. Besides, there is such pleasure in hearing words like “kantaap” (slap) and “kandam” (useless) that so rarely find their way into Bollywood scripts. My pick of the film’s phraseology though is “nil battey sannata” and how it smoothly rolls off Chanda’s tongue.

It helps that the actress playing her is brilliant. With Nil Battey Sannata, Swara Bhaskar – a memorable satellite player in Raanjhanaa and the Tanu Weds Manu films – gets a lead role in a worthy project. A city-bred, educated woman herself (Bhaskar is an MA from JNU) she subdues her naturally sophisticated body language to slip into this role without becoming a cliche.

Riya Shukla is a flaming ball of energy and well cast as the little spitfire Apu. She is a discovery.

Ratna Pathak Shah plays the elderly doctor-householder who helps Chanda along with her ambitions. She brings warmth, empathy and dignity to the role which, incidentally, is vastly different from the part she plays in Kapoor & Sons that is still running in theatres.

She is the sort of employer about whom newspaper articles are not written because the media, justifiably so, is focused on those who ill-treat their domestic help. While their cruelty, casteism and classism ought to be chronicled and condemned, it is also good to be told about this benevolent memsaab who goes out of her way to help her bai, because such people too do exist.

Pankaj Tripathi is a scene-stealer and showstopper as the school principal and Maths teacher Srivastava Sir. Despite the thoroughly entertaining, quirky mannerisms and mincing speech, it is to Tripathi’s credit that he does not reduce Srivastava to a caricature. In this performance, it is impossible to spot the bloodthirsty Sultan Qureshi he played in Gangs of Wasseypur 1&2.

The writing of his character too is nicely shaded. Srivastava is well-intentioned, yet humiliates his weak students, perhaps thinking, like so many Indian teachers do, that he is motivating them. Extreme portrayals are easy, the challenge lies in the middle path. Nil Battey Sannata reminds us that as with all categories of people, among teachers, parents and children too there are the good, the bad and the ugly, and sometimes the entire spectrum within the same person.

The film’s finer details though are what make it an all-round interesting experience. Such as the unspoken caste, communal and gender equations. Dr Diwan’s husband is sweet but stays in the background and no information is offered about Apu’s father. Whatever happened to him apparently no longer warrants discussions. Chanda’s singleton status also adds dimensions to the story, such as the relationship of equals as much as mother and child in the household.

Even the use of the Taj is refreshing. Most films mindlessly latch on to architectural landmarks as city identifiers. Example: a character who lives and works in south Delhi passing Red Fort in north Delhi on her way from home to work. In this film, the Taj first makes a fleeting – and logical – appearance, and in the end forms the backdrop to a long monologue Chanda delivers to Apu. It feels right. If you have visited the Taj you would have experienced the calming effect of the monument which, here, matches Chanda’s sedate words in Bhaskar’s velvet voice.

Nil Battey Sannata has a light touch, yet is serious as hell. Despite the frenzied pace of Chanda’s days, the film itself has an air of composure. To see it merely as a lesson in the importance of education would be to limit it. This is an uplifting film about the importance of having dreams.

Ashwiny Iyer Tiwari, where have you been hiding all this time?