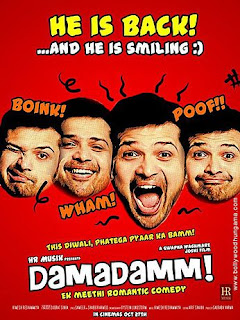 TV show host Gaurav Kapur posted this comment on Twitter on the day of Damadamm’s release: “U'd have to be pretty dumb to release your film up against Ra.One. Or in some cases, Dumb-dum-ah-Dumb!” You know what’s far dumber than that, Gaurav? It’s to release a lousy film on the same day as a Shah Rukh Khan-starrer. After all, we do know of instances from the past when a small film has come to theatres alongside a mega-starrer and vanquished the Goliath on the scene. Look no further than Yashraj’s Lamhe back in the 1990s. It starred Sridevi and Anil Kapoor at the height of their glory. On the same day came the unheralded Phool aur Kaante starring two unknowns called Ajay Devgan and Madhoo. Itihaas gawaah hai that Lamhe flopped while Phool aur Kaante went on to become a superhit. The problem with the release of the Himesh Reshammiya-starrer Damadamm on the same day as SRK’s Ra.One is that Damadamm is a non-starter, a completely hopeless case. Or as Gaurav Kapur might put it, it’s a “dumb-dum-ah-dumb” film.
Damadamm stars Himesh as Sameer who is saddled with a nagging girlfriend called Shikha. When she leaves town for a few days, he realises he’s tired of her controlling ways, breaks up with her on her return and hooks up with his boss’ sister Sanjna. But is he in love with Sanjna? Is he really and truly over Shikha?
Well, there’s some pointless, meandering, illogical dialoguebaazi that is employed to answer those questions, but honestly, it’s hard to care when you spend most of your time asking yourself how two smart, good-looking women could possibly be interested in this guy. Himesh continues to struggle in the acting department, but I still want to be fair to him. If Arjun Rampal could deliver a performance of the sort he did in Raajneeti, if John Abraham could emote the way he did in Nagesh Kukunoor’s Aashayein, if Katrina Kaif could make the journey from Boom to Mere Brother ki Dulhan, then there’s no telling how far time and experience can take even the most derided of actors. But these three stars are great looking and charismatic, which means much is forgiven while they take their time to evolve into something better than they were when they started out. Himesh, on the other hand, does not have the screen presence to inspire patience in an audience.
Worse, the film is trying too hard to be cool. At the start, when we are taken through a flashback of scenes from Sameer’s five-year-long relationship with Shikha, for reasons best known to the director, the words emerging from their mouths are also flashed on screen in thought bubbles. Why? The lyrics of this film’s songs are similarly inexplicable. Why does Sameer sing that his love for a woman is “Like Mango”? No idea.
The film also has pretensions to Karan Johar-style grandeur which is evident in a party scene where every single character seems to be wearing black or white or black-and-white to match the white walls of the venue. That kind of colour coordination works for KJo because his films are opulent, fantastical melodramas that also feature strong stars with well-written roles. In Damadamm the art direction seems purposeless!
Himesh the singer varies his singing style in quite an interesting fashion through a couple of the film’s songs, moving many miles away from his trademark nasal tone. That would have been worth talking about if the songs weren’t playing out against such a sterile story. But they are, as a result of which even the climactic number, Umrao jaan a.k.a. No touching, no kissing, only seeing comes across as being low-brow and sadak chhaap, whereas in a better film and placed in an appropriate context, it could possibly have been funny in a kitschy sort of way.
Damadamm does have a few unexpected plus points though … The girls are pretty plus they’re interesting actors who deserve better than this film. It’s also such a refreshing change to see that Purbi Joshi (Shikha), who is clearly a dark-skinned woman, makes no effort to lighten her complexion the way so many Bollywood actresses still do. And Damadamm features a sari-wearing, Hindi-speaking Lily Aunty who is far removed from the Hindi film stereotype of the English-speaking, dress-wearing Christian gangsters’ molls and cabaret dancers of up to the 1990s. There are even a couple of corny lines that could have been amusing if delivered by a more impactful star – imagine Salman Khan, instead of Himesh, crudely comparing a relationship break-up to relief from five years of constipation!
Sadly for Damadamm, it’s Himesh that they’ve got in combination with a bland story and storytelling style. So when Sanjana (Sonal Sehgal) says to Sameer in the film, “I knew if you break up with Shikha toh tumse pyaar na karna mere liye bahut mushkil ho jaata (I knew that if you break up with Shikha then it would become difficult for me not to fall in love with you),” all I could do was stare at the screen incredulously and think, “She’s kidding, right?!”
Rating (out of five): *
CBFC Rating:                       U/A without cuts
Running time:                        120 Minutes
Language:                              Hindi