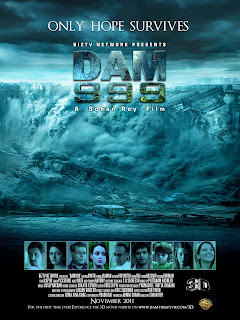 Oh dear, what an insult to the Mullaperiyar Dam issue! For weeks now I’ve been getting tweets from Keralite readers inquiring about Dam 999. Is the film an effective comment on an issue close to their hearts? Will it inform the world about the risk to the lives of all those living in areas surrounding Mullaperiyar? The questions are natural considering that the film’s title seems like an allusion to the Tamil Nadu government’s 999-year lease to operate the Mullaperiyar Dam located in Kerala. Now that TN has banned the film, director Sohan Roy is crying himself hoarse that it has nothing to do with Mullaperiyar. So why 999, Mr Roy? Because 09/09/2009 is a significant date in the story? Feels suspiciously like a publicity stunt deliberately designed to mislead.
But the possible deception is not the worst part of Dam 999. The worst part is that it’s a lousy film. The story set in Kerala is about a couple who’ve been kept apart by astrology. Vinay and Meera have been friends ever since his father Shankaran took her into his home as a little girl when she lost her parents. The years pass, they fall in love. But dad – a keen practitioner of both Ayurveda and astrology – matches their horoscopes and arrives at the conclusion that they are incompatible. Vinay does not care, but Meera refuses to defy Shankaran. Years of separation and heartbreak follow, until Vinay returns home to get his diabetic son treated by Shankaran. Also in the picture is Vinay’s estranged wife Sandra, a foreign TV journalist who arrives in town to cover a controversial dam in the area; an unscrupulous local politician who ignores warnings that the new dam he has built is in a precarious condition; and sundry other characters who are so irrelevant despite the screen time they get, that I don’t want to bother listing them.
The Vinay-Meera romance is the focal point of the film, but neither their love nor the satellite stories add up to much. What on earth is Dam 999 trying to say? Well, there is an attempt to use a dam-on-the-verge-of-bursting as a profound metaphor for the emotional pressure cooker that .the lead couple have been living in. It’s all quite wonderfully silly!
The choice of language too is purposeless. Dam 999 is in English with a smattering of Malayalam spoken by a few very minor characters but not by the leads. There is also a Hindi version which I have not watched, but I can tell you that the dialogues in the English original are atrocious. English is certainly not the natural tongue for that milieu – in real life, I’d imagine characters like Vinay, Meera and Shankaran perhaps blending Malayalam and English in equal parts. But even if I were to believe that these people speak only the language of our colonisers with not a touch of Malayalam, I can assure you that no Malayali – in fact, no human being at all – would utter such stodgy, contrived, bookish lines. Instead of telling her husband she wants a kid, a woman says to him one day in bed: What would it feel like to have someone between us? For a moment I thought she was suggesting a threesome! Teehee!
The actors most pathetically served by the dialogue writer are Vimala Raman and Vinay Rai playing Dam 999’s star-crossed lovers. Both do their best with the laughable lines given to them, and deserve National Awards for having kept straight faces throughout. Rai is a very attractive-looking man who is clearly too good for this amateurish film. And Raman, talented though she may be, is amusingly miscast here. You see, Meera is supposed to be a Sardarni, but casting a classical Malayali beauty like Raman as a Punjabi is akin to getting Madhuri Dixit to play a Japanese woman in a film. The actress – a former Miss India Australia – also fails to entirely camouflage her marginally foreign accent. But that faux pas is not one-tenth as entertaining as watching National Award winner Rajit Kapoor tying himself in knots trying to look and sound Malayali. The one who comes off best in Dam 999 is the pretty American actress Linda Arsenio playing Vinay’s wife Sandra. She dashes around town issuing instructions to her TV crew and to local dam experts with an earnestness that belies this film’s stupidity.
At one point in Dam 999, while fobbing off Vinay’s renewed advances, Meera reminds him that every time they’ve tried to express their love for each other, something bad has happened. With all his pretensions to grandeur and philosophising, I wonder if the film maker realises that the regressive message emerging from his film seems to be that we humans must accept what is written in the stars, that those who dare to follow their dreams are doomed!
Films like Dam 999 are the reason why I respect David Dhawan, Rohit Shetty and Anees Bazmee: they don’t promise anything more than they intend to deliver! Misleading an audience is a crime! The Mullaperiyar Dam deserves a better envoy than this damned film!
Rating (out of five): 1/2  (this half star is only for Vimala Raman, Vinay Rai & Linda Arsenio who really tried!)
Footnotes: (1) I watched the 2D version of Dam 999. It’s been released in 3D too – I’m not sure why, since the disaster sequences in the film are minimal and not particularly impressive. (2) Warner Bros is distributing this film. What were they thinking when they signed up for it?!
CBFC Rating:                       U/A without cuts
Running time:                       110 Minutes
Language:                             English with some Malayalam
Photograph courtesy: http://www.damthemovie.com/
Posted by Anna MM Vetticad at 8:38 AM