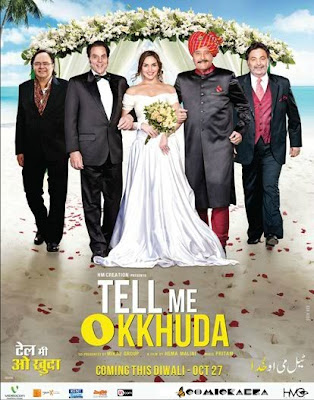 It breaks my heart to write this review … because I’m a softie when it comes to veteran stars, and as you know, this film stars the legendary Dharmendra, Hema Malini, Rishi Kapoor and Vinod Khanna! But a girl’s gotta do what a girl’s gotta do! Sigh!
Tell Me O Kkhuda feels like a mother’s offering of love to her offspring, an affectionate effort by Hema Malini to resurrect the career of her daughter Esha Deol. But somewhere between an uninspiring script and a mid-stream switch in directors, it actually does more harm than good to  Esha, who’s a reasonably good actress but has just not managed to make it in Bollywood in the nine years since she made her debut with Koi Mere Dil Se Poochhe.
In TMOK, Ms Deol plays a happy-go-lucky young bestselling author called Tanya who chances upon evidence one day that she’s adopted. She loves her mother and father (played by the always quietly dignified Farooque Shaikh and Deepti Naval) but feels compelled to discover her biological parents. The task, however, is tough because the records of her birth were destroyed in a hospital fire, and the lazy record-keeper casually points her in the direction of three possible sets of parents.
Sounds promising? But after an interesting start, there’s a markedly unenergetic feel to the film which fails to live up to the potential of its basic concept and evident budget. Producer Hema Malini – who dropped director Mayur Puri and took over the reins part way through the shoot – seems to have a fascination for girls in search of their parental roots. Her earlier directorial venture Dil Aashna Hai (1992) starred Divya Bharati who was out to find her mother from a choice of three women, with the help of a friend played by Shah Rukh Khan. In TMOK, there are two friends helping Esha instead. And in place of the daughter’s search for her mother in Dil Aashna Hai, here Esha is on a quest for both her parents.
The locations are pretty (Rajasthan’s Pratapgarh, Kas in Turkey, and finally Goa) BUT the cinematography does not entirely do justice to them. The storyline has promise BUT the treatment does not give it the emotional appeal it could have had. The cast is talented BUT their overall impact is unsatisfactory. Dharmendra, Rishi Kapoor and Vinod Khanna are capable of so much on a good day. They’re joined by the beautiful award-winning Turkish actress Meltem Cumbul playing Kapoor’s wife. BUT no actor is better than the written material on which they’re basing their performances, and the script of TMOK is decidedly lacklustre. Esha’s friends are played by Arjan Bajwa – the handsome and talented model who you will remember from his role as Priyanka Chopra’s boyfriend in Fashion – and Kaminey and Faltu’s memorable Chandan Roy Sanyal BUT both are given short shrift by the script which reduces them to background characters although they’re present in the on-screen proceedings from start to finish. Esha participates in a camel race that could have been filled with suspense and spectacular shots of the desert, BUT it is no such thing.
Saddest of all, Esha Deol for whom this film is meant to be a showcase, comes off looking both tired and uninvolved. Does her make-up artist not know how to handle under-eye dark circles? Didn’t the film’s light technicians and camerapersons know how to highlight a facial glow? It’s really unfortunate because this film is the first time that Esha has appeared on screen with both her legendary actor parents. Oddly enough, the episode involving Dharmendra and Hema Malini has been the least efficiently handled.
As I said, it breaks my heart to write this review …
Now I’m off to gather up the pieces of that broken heart before I write my next review!
Rating (out of five):  *
CBFC Rating:                       U without cuts
Running time:                        132 Minutes
Language:                              Hindi