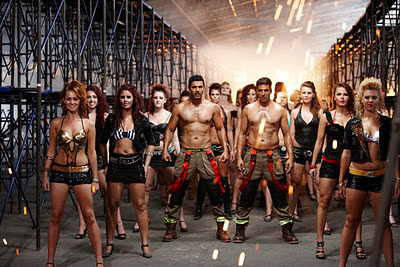 If you don’t do as I say, I’ll feel it was a waste that I ruined my figure to give birth to you! It’s not the sort of line you expect to hear from an elderly, tubby, gray-haired Hindi film mother. And that’s precisely why it’s hard not to chuckle when Bharti Achrekar – playing the mata to Akshay Kumar’s Jerry Patel – flings the jibe at her son in Desi Boyz.
Place: London. Year: 2009. Jerry is a loser who does small jobs and takes care of his orphaned nephew Veer while sponging off his MBA friend Nick Mathur (John Abraham). Their world comes apart when Nick loses his job to recession, leaving him with his high-maintenance girlfriend Radhika to worry about while Jerry battles a Social Services department determined to send Veer to foster care. Along comes an offer from a male escort agency, Desi Boyz, whose owner (Sanjay Dutt in a cameo) points out that his is a business that never goes out of business. Jerry has no qualms about the career move with its promise of quick money since he needs to pay Veer’s fees immediately, but Nick’s conscience protests. The film is about how the path they choose affects Nick’s relationship with Radhika and Jerry’s future with Veer.
There’s humour, emotion and drama here, and debutant director Rohit Dhawan (son of veteran David Dhawan) pulls it off for the most part despite his highly flawed screenplay. The first half of the film is especially entertaining, filled with wacky one-liners and pretty people. But over and above everything else, what carries this film through despite its many blemishes is the Akshay Kumar-John Abraham pairing. In Priyadarshan’s Garam Masala in 2005, John was overshadowed by Akshay’s charisma and comic timing. In those days, rumours also abounded about how Akshay would bully directors into cutting down his co-stars’ roles. That was before he began repeating himself so much in comedies that the law of diminishing returns finally kicked in even at the box-office. In Desi Boyz, it’s nice to see a vastly improved John getting equal screen space and matching up well to Akshay who is back to being his naturally funny self.
Am I being a Female Chauvinist Pig for enjoying Desi Boyz? I ask because I remember finding Laaga Chunari Mein Daag regressive with its stance that bechari girls have no option but to turn to prostitution to make money in the big city. But hold on … Desi Boyz does not suggest that men have no choice but to become strippers to support themselves. There’s absolute clarity that Jerry joins the agency because it’s an easy means to make a quick buck during a recession.
I wonder too whether I should feel guilty for not objecting to the unabashed objectification of the men in Desi Boyz. But what the heck, in an industry that has made a habit of objectifying women, why shouldn’t we girlz get to gawk at great-looking boyz with great bodies who happily take off their clothes for us?! Yeah, I love the gusto with which Akshay and John throw themselves into their pole dance and striptease routines. The characterisation does not match their no-holds-barred song-and-dance and facial expressions though – perhaps the film should have admitted that despite the compulsions that drew them to the profession, after a while they did become addicted to the female attention. Problem is, Rohit Dhawan wants to serve us a comedy revolving around male strippers but clearly cringes at the thought of Indian boyz having sex for money. So we are told that Jerry and Nick work on a no-sex-with-the-clients basis, and when Jerry admits to having slept with one lady, it’s portrayed almost as an act of charity! Haha … unintentionally amusing, I say! Likewise, the film takes the conventional route of demanding that the woman should forgive her erring boyfriend; when Radhika (Deepika Padukone) asks Nick if he’d have been able to erase from his mind an image of her standing half naked in a room surrounded by lustful, screaming men, he has no answer. Instead he sends her off on a guilt trip. After all, it is every woman’s duty to pardon her man if he asks nicely enough, right?
There are several other issues I have with Desi Boyz … Radhika seems like an idle character who spends all her time making demands on Nick’s purse and it’s only when I checked the film’s website that I realised she’s an architect, though I don’t recall any architecturebaazi in the film … Jerry cleans up his act in the second half and the woman he falls in love with (Chitrangda Singh) seems not to raise half an eyebrow at his earlier avatar as a stripper! … It beats me why the film pointedly projects 44-year-old Akshay as a man in his early 30s! … There’s something icky and tacky about the way Radhika’s father (Anupam Kher) appears to leer at Nick ... Apart from the lively title track, the rest of Pritam’s songs are redeemed only by the slick picturisation … Random scenes are thrown into the mix that have no connection with the story – like Jerry’s confrontation with a white man who insults Indians. Just because it worked in Akshay’s earlier hit Namastey London, must we repeat the formula without any contextual relevance? … And the film’s ending is silly, abrupt and contradicts the preceding scenes.
But perhaps I’m thinking too much. The truth is that despite these reservations, I had fun watching Desi Boyz. Akshay and John seem to be having such a good time, that their enjoyment is infectious. Frankly, they look more in love with each other than with their respective girlfriends who have little to do beyond look stunning, which Deepika and Chitrangda do very well! So if you’re in a mood to forgive the mindlessness, then go ahead people – make some noise for the desi boyz!
Rating (out of five): **3/4
CBFC Rating:                       A
Running time:                       117 Minutes
Language:                             Hindi
Photograph courtesy: http://www.desiboyzthefilm.com/
Posted by Anna MM Vetticad at 9:55 AM