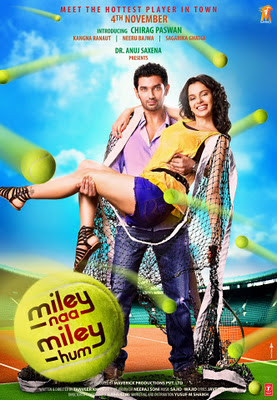 The good thing about Miley Naa Miley Hum is that it marks the debut of a sweet-looking actor called Chirag Paswan. Politician Ram Vilas Paswan’s son has a pleasant presence on screen and a well worked out body (though I can imagine my mother smacking him between the shoulder blades and telling him to improve his posture). The other positive point is that I actually enjoyed Kangna Ranaut’s performance – it’s been a while since that’s happened! Here’s an actress who started off being so interesting but somehow somewhere lost her way with her awkward diction, poor voice modulation and disappointing choice of roles. In Miley Naa Miley Hum she looks refreshingly pretty and is genuinely funny playing a guileless, accident-prone model.


So what’s the story? Paswan Junior plays Chirag Mehra, a rising tennis star whose warring parents have torn him asunder all his life. He’s determined to divide his time between them until he finds a way to get them together again. So, he works at his father Siddharth Mehra’s vineyard but also travels to the city to help his mother manage her business empire. Trouble starts when mom (Poonam Dhillon) tries to fix him up with her London-based friend’s daughter Kamiah Malhotra (Chak De girl Sagarika Ghatge) while dad (Kabir Bedi) gets into competitive mode and promises him to Manjeet Ahluwalia (Neeru Bajwa), the daughter of his boisterous, rustic buddy from Bhatinda. Chirag is not interested in marriage, so in an inspired moment he points to a model on a hoarding (Anishka played by Ranaut) and claims he’s in love with her.
If you think about it, that précis is filled with promise, and the catchy song Katto Gilheri Chamak Challo Rani featuring a lovely-looking Shweta Tiwari arrives early in the narrative to suggest that this film will be an entertainer. But Miley Naa Miley Hum’s dialogues are amateurish, and the script fails to flesh out most of its characters or explore their relationships with any depth. So it’s nice to see older actors get so much screen time playing Chirag’s parents, but the reason for their animosity towards each other is never established although it’s the fulcrum of the film. We are told in passing that he was playing tennis while she was in labour, which led her to believe that the game was more important to him than his wife, but … naah, that sounds too flimsy to be credible. Again, since Chirag coped with his parents’ hatred for each other throughout his childhood, the circumstances that drive him over the edge as an adult don’t seem compelling enough; nor does the director manage to make us share Chirag’s desperation to re-unite mom and dad.

Manjeet from Bhatinda is a parasite, but Chirag seems fond of Kamiah from London … Why then is a sweet guy like him so insensitive to her feelings? Why does he not bother to explain to her his reasons for opposing their match? Manjeet, incidentally, is introduced to us in the film’s most ridiculous scene: Siddharth Mehra phones her father during her engagement party and expresses a desire to have her as his bahu; daddy dear simply gets off the phone and cancels her engagement … because apparently that’s what you do for a good friend … and when her fiancé’s family gets furious, Manjeet yells at them … because she blindly believes that her father must have a good reason for doing what he did, no questions asked! Yeah sure! Very convincing! Ranaut’s character Anishka is introduced to us in an understatedly amusing scene (she tastes sushi for the first time and describes it as “kachchi machchhi”) but she then disappears for a long gap, and nothing is done to keep her on our minds in the interregnum. The tennis match in the finale should have been a high-adrenaline experience but it’s not written or edited well enough for that. There is an adopted brother in the picture who loyally follows Chirag everywhere, but we are told little about him. Besides director Tanveer Khan is so focused on the hero’s looks that he allows the make-up artist to coat Paswan Junior’s face with too much pancake, while allowing spots to show on Ranaut’s skin in several shots.
We’ve seen children of broken or troubled marriages in other Hindi films (Akele Hum Akele Tum, Life In A Metro, We Are Family) but it’s unusual for Bollywood to deal with the impact of a parental split on adult offspring. Miley Naa Miley Hum is not insufferable, it’s even nice in places, but it sorely lacks depth! Still, there’s something likeable about debutant Chirag Paswan – and that’s something to hold on to.
Rating (out of five): *1/2
CBFC Rating:                       U without cuts
Running time:                        125 Minutes
Language:                              Hindi
Photograph courtesy: https://www.facebook.com/#!/MNMHthemovie