Teen Thay Bhai could have been that fun – even if mindless – children’s movie that India so rarely makes. Just look at it … a story with immense potential being told through three actors as fine as Om Puri, Deepak Dobriyal and Shreyas Talpade. But though debutant director Mrighdeep Singh Lamba’s film is enjoyable in parts, it doesn’t live up to the promise that its credits offer. Produced by Rakeysh Omprakash Mehra, Teen Thay Bhai is the story of three estranged brothers – Chixie, Happy and Fancy – who reluctantly come together in a mountainside cottage owned by their late grandfather, due to compulsions imposed on them by his will. Chixie is an ill-tempered husband and father. Happy is an unhappy dentist who has never forgiven his little brother a childhood indiscretion that cost him the love of his life. And Fancy is an aspiring actor whose conversations are peppered with references to Hollywood films. 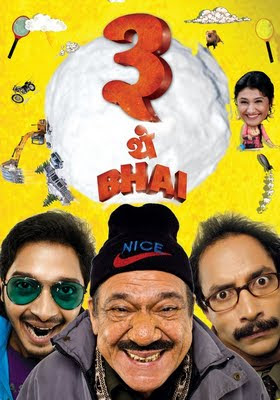 Put them together in an isolated house on the snow-covered slopes of Himachal Pradesh and you can just imagine the possibilities for some explosively funny situations. And it does work in bits and pieces. But those bits and pieces are separated by too many patches in which the director tries to compensate for the indifferent dialogue writing with some loud acting. So, each time you feel “now the film’s gonna lift off” …  “oh okay, maybe now” … the pilot fails to shift the right levers and it’s back to the head of the runway again. At places the jokes are so predictable that twice, in the hall where I watched the film, a lady yelled out her guess of what would happen next … and she was right! And one more thing: I’m not sure I wanted to live to see the day when Om Puri farts on screen, but that’s what he does in Teen Thay Bhai.
Puri has for a few years now looked completely uninvolved in many of his films, almost like a bystander watching his co-stars in motion. The good thing about TTB is that for a change he throws himself into the proceedings. The bad thing is that he serves us a stereotypically loud Punjabi son-of-the-soil with only sporadic humorous appeal. Deepak Dobriyal delivers the smoothest performance of the trio, and teams up with TV’s Ragini Khanna to give us a sweet little romantic track on the side. Khanna – who soap buffs will recognise as Suhana from the hit show Sasural Genda Phool – is as feisty and pretty in TTB as she is in SGP, though her role in the film is not substantial enough to match her television star stature. But the disappointment in the cast is Shreyas Talpade (yes, wonderfully warm and real Shreyas Talpade of Iqbal and Welcome to Sajjanpur) who hams his way through the role of a bad actor in TTB, when we all know he’s so capable of being so much better.
Maybe Talpade as Fancy with the leather jackets and pants just gave up on this film when he realised that instead of snow, the production team was showering little balls of white confetti on his back. Or maybe I saw that wrong, and it was actually snow. But it sure as hell looked fake to me.
And Teen Thay Bhai sure as hell looked to me like a film that was made for bachchas till it went all violent and gory. Yes, despite the inconsistent feel of the film, the children in the theatre where I watched it seemed highly amused by Chixie, Happy and Fancy’s juvenile behaviour, and I could imagine some of the madcap kids in my family getting kicks out of hearing Fancy say: “Aapko ghalat family hui hai. Hum to benchelors hai.” But then the director and writing team decided to throw in scenes of police torture; an extended situation involving drug trafficking; and a joke that has Fancy facing a woman on a mobike, staring at her boobs and asking, “Silicons?” Therein lies the biggest problem with Teen Thay Bhai: it’s not consistent enough for a serious film buff who doesn’t mind the occasional OTT comedy, it’s not clever enough for adults, it’s not suitable for kids. So tell me then, who do I recommend it to?
Rating (out of five): **