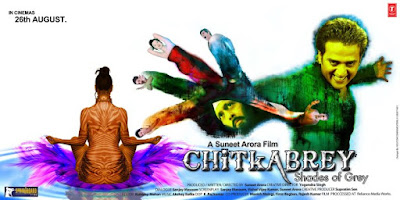 But if you are a kinky sort who’s about to rush off to a DVD store or to some questionable website to find Chitkabrey, let me warn you: you’ve got to be pretty desperate to sit through this F-grade film with its bizarre storyline, worse acting, unprofessional lighting, poor quality camera work, cheap costumes, crude makeup and pathetic sets. How desperate could Bhojpuri star Ravi Kissen be to make it in Bollywood, that he actually signed up for this one?!
The story, if you can call it that, is about a man who hatches a far-fetched plot to get together a whole bunch of his college mates from across the world to an isolated house under a false pretext. Once they’ve gathered, some with their spouses, thinking it’s a college reunion of some sort, a faceless voice booms out at them that they’re captive in that building. Dan te nan! After much fuss and suspense, Ravi Kissen – with heavily kohl-lined eyes – appears before them to explain that this is an act of revenge for a humiliation they had all meted out to him back in college. Dan te nan! He then splits the couples and sends one of each off to collect some money (that I suppose is compensation for emotional trauma) while keeping the other as collateral in his eerie house. Dan te nan! Te na na na!
While all this is going on, excuses are found to play us some bad songs. Apparently Chitkabrey is meant to be an anti-ragging film, but the serious theme is buried under horrendously bad writing and execution. Among the film’s endless de-merits are the couple of white people it serves us in smaller roles whose acting skills make the rest of the actors seem like super performers. The worst of the main cast has to be Bollywood’s latest foreign import Sweetlana Manolyo whose screen presence by itself adds several points to the film’s sleaze-o-meter. But there are some familiar faces in this film who surely couldn’t be thinking that this is all they deserve?! On a good day, both Ravi Kissen and Rahul Singh for instance, are capable of turning out decent performances. Just this year, Singh featured as a rowdy villager in that sweet little road movie Chalo Dilli starring Vinay Pathak and Lara Dutta. He also played Poorna Jagannathan’s angry ex in Delhi Belly. Chitkabrey gives him a much larger role of course, but it’s also a blot on his CV! Was it worth it?
Come to think of it, this is actually an educational film that should be compulsory viewing for all students of cinema. Few films can teach you better about the worst that Bollywood can be!
Did I utter the word “educational” with reference to Chitkabrey?! Yeah okay, I was just kidding! Gotcha!
Rating (out of five): -60 stars
Language:        Hindi
Photograph courtesy: https://www.facebook.com/Chitkabrey
Posted by Anna MM Vetticad at 12:30 AM