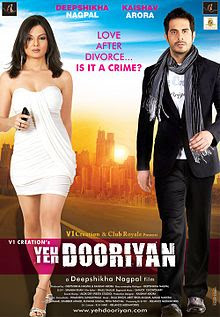 “Love after divorce … Is it a crime?” I can’t remember the last Hindi film that asked such a question. Yeh Dooriyan has another query up its sleeve: Is it a crime for a woman to fall in love with a younger man? The film is about 35-year-old Simmi, a successful choreographer and dance academy owner who is a divorced mother of two children. Her parents and friends encourage her to find a man in her life. Then one day she meets a young model called Raj who pursues her relentlessly. He comes across as a clean-hearted guy and (perhaps the greatest qualification in Simmi’s eyes) appears to like children. The couple fall in love. But will a society that is open to older-man-younger-woman romances accept this relationship … considering that Simmi is not just older than Raj, she’s also a divorcee? More to the point: how will his family react?
The basic storyline is not just believable, it’s also interesting. If you look around you, despite the seeming liberalism that pretends to pervade our world, we are still by and large an extremely conservative society with shockingly regressive views towards single women of every variety – unmarried, widowed or divorced. The questions thrown at Raj, his reaction to societal compulsions, the way the men in Simmi’s life respond to her … these are all credible and real. The problem with Yeh Dooriyan does not lie with its storyline, but elsewhere. The indifferent acting by key cast members robs the film of finesse. Kaishav Arora needs to be singled out here for lessons in an acting school with a particular focus on dialogue delivery. But the death knell for the film is rung by the poor language used by the dialogue writer, sometimes to laughable effect. There are also several songs with unmemorable tunes, unoriginal choreography and at least in one case, unintentionally amusing lyrics. And by that I mean the one that goes, “I wanna be your lover, zindagi bhar.”
Unfortunately all these factors add up to make this film a rather downmarket product. And I say “unfortunately” because Yeh Dooriyan does pose some important questions and takes a position on single women that’s uncommon in Hindi filmdom. Back in the year 2001, in Haan Maine Bhi Pyaar Kiya, the manner in which Karisma Kapoor’s character shame-facedly confesses (there’s no other word for it) her status as a divorcee in whispers to the new man in her life was a strange exaggeration of the reality. A woman in her social circle might face social opprobrium, but it would be couched in sophisticated terms and she’s unlikely to be so melodramatic while revealing the truth to friends and acquaintances. In Yeh Dooriyan a decade later, Simmi is unapologetic about her life and takes on the world with her head held high. The decision she ultimately arrives at for herself is also rather brave considering that Hindi film audiences don’t seem to be very fond of highly independent female leads. Wish the quality of writing had been more consistent.
At the press preview for this film, Deepshika was present to receive a certificate from a representative of the Limca Book of Records for having handled the maximum number of jobs for a single film: apart from starring in Yeh Dooriyan, producing and directing it, she’s also credited for the story, screenplay, dialogues and choreography. You know something, hon … you’ve got your heart and head in the right place, but next time please delegate the screenplay, dialogues and choreography to someone else.
Rating (out of five): *1/2
CBFC Rating:                       U without cuts
Running time:                        115 Minutes
Language:                              Hindi
Photograph courtesy: http://en.wikipedia.org/wiki/Yeh_Dooriyan
Posted by Anna MM Vetticad at 1:38 AM