However courageous you may be as a director, you have to make a feature film to be acknowledged as a feature film maker. Kya Yahi Sach Hai is about the corruption in the Indian Police Service, the unholy nexus between police, politicians, power brokers and bureaucrats, and the games they play involving sex, lies and money. Now this is nothing new to consumers of Bollywood – after all, Hindi cinema has explored this theme in numerous films for decades now. What gives this film the potential to be special is that it’s directed by former IPS officer Y.P. Singh and based on his book Carnage by Angels. 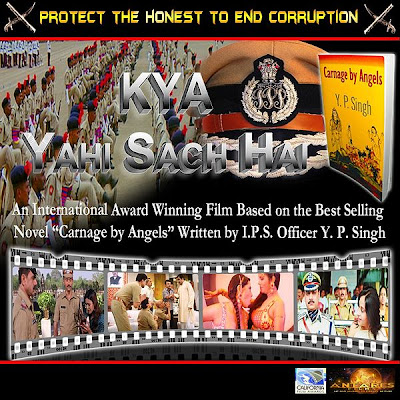 So yes, Kya Yahi Sach Hai is much richer in its detailing than many we’ve seen on the subject, with touches that could have only come from either in-depth research or an insider’s eye ... a minister’s sidekick bluntly tells a policeman the going rate for a coveted posting, “sponsorships” are sought from industrialists whose bidding these policemen will do once they get the seat they seek, someone refers to the IAS as the I Am Slave service, a top cop touches the feet of a state home minister pleading to be kept on in Mumbai, and that same minister brings an honest officer to Mumbai to clean up the streets but then finds the fellow’s straightforwardness too hard to handle. Unfortunately, none of this is enough to redeem Kya Yahi Sach Hai. The film can hardly be counted as either a feature or a documentary or a documentary feature. Because it is too weighted down by its poor production quality and amateurish script to count at all.

The film begins with a waiter at a party attacking a senior policeman’s wife and wrenching her gold necklace off her. Later, we discover that this man was filled with rage because that piece of jewellery had belonged to his late wife who had committed suicide when he snatched it from her to pay off a debt to a local gambling den which in turn had offered it as hafta to a junior police official who passed it on to the town top cop’s wife. When the waiter’s back story is narrated to him, a young IPS Officer called Raghu Kumar resolves never to take bribes. Little does he realise that his honesty could end up as the biggest roadblock in his career. As a parallel thread in the story, we are also shown the life of a fellow IPS officer who accepts money and sexual favours, and is willing to prostate himself before the Home Minister of Maharashtra if that will get him a posting or award he wants. Meanwhile, Raghu Kumar is humiliated with an inquiry, suspension and the public stripping of his badges and other IPS accoutrements by a junior.

Director Y.P. Singh had narrated his own personal battles against corruption in his book, so it’s clear that he’s telling his story here. In that sense, there’s no doubt it took courage to make this film. But I found it worrisome that while attempting to paint Raghu Kumar as a faultless officer, Kya Yahi Sach Hai seems to be justifying police torture – Raghu tends to thrash the shady characters he rounds up, giving just the right amount of ammunition to his enemies looking for an excuse to get rid of him. Is it this film’s position that such atrocities are acceptable because they are committed by an officer who does not take bribes?

Also, honesty is all very well, but this policeman seems naïve. While conducting raids on people who are obviously paying hefty protection money to his seniors, he has no strategy to counter the bosses’ inevitable rage when they find out. There’s a difference between honesty and foolishness, and deifying foolishness is hardly a good way to convince young people to hold on to their integrity!

These, of course, are debatable matters. What’s not debatable is that Singh’s message would have reached the masses if a more efficient film maker had directed this film. Most of the ‘actors’ in Kya Yahi Sach Hai ham with all their might, others are so bad that you can’t even call what they’re doing hamming. And the list of technical flaws is too long to post here. In the first chapter of his book, which is available on this film’s website, Singh quotes a fictional Head Constable Bhushan Sankhe recalling his past to Raghu Kumar: “All officers used to place their trust in me. My acumen for collection was over-powering. This, coupled with my honesty in money matters made me the most fitting entity for the prime charge of collecting bribes. My conduct was sincere and impeccable.” The matter-of-factness in that statement is delightful. I wish with all my heart that Kya Yahi Sach Hai had been a film I could recommend to you.