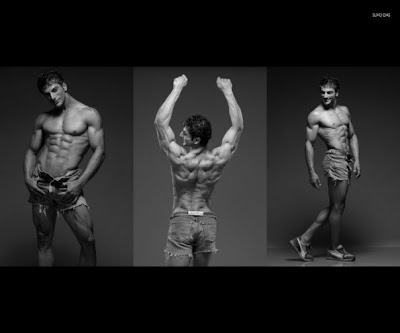 The nicest thing I can say about this film is that I’ve seen worse! Who’s There? Kaun Hai Wahan? is the story of a young man who is haunted by his bride’s dead ex-boyfriend. It all begins when they’re on their honeymoon and Sunny Malhotra (Rajbir) sees Jay (Gagan Kang) as the watchman of the resort where they’re staying, and then again, and again. Since Muskan (Kalpana Mathur) apparently doesn’t see what her husband is seeing, she can’t know that it’s Jay who appears before Sunny. After several traumatic experiences, the couple returns to their home city Mumbai where Sunny sees photographs of Jay with Muskan and identifies him as the ghost who is driving him up the wall. Muskan reveals her past to him at this point: that Jay had been heart-broken at the prospect of her marriage and had committed suicide, preferring death to seeing her as another man’s wife. 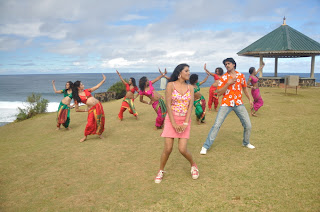 What follows may not constitute the most original story in the world, but the concept is sufficient for reasonably worthwhile spook fare. Unfortunately, the production values of Who’s There? are below par which of course spells doom for any effort to scare us. Besides, the film does not come up with a single stunt that we’ve not seen before in a ghost story ... there’s smoke, a spirit with inflamed eyes, a camera descending a staircase, bloody water (or was that meant to be blood?) flowing from a tap, a priest who can sense an evil presence, the usual stuff. And it’s really weird that they thought up an excuse to get the heroine doing a dance number in the middle of all her trials and tribulations … one night Sunny sees her cavorting around to a song with Jay, but as he approaches them Jay disappears, and Muskan seems not to have any memory of the episode.
Actor-turned-model Rajbir is the most interesting of the lead trio. Regular TV viewers might remember him from that convoluted television swayamvar called Lux Perfect Bride which ran on Star Plus. The guy has a decent screen presence and looks like he could be moulded into an actor worthy of our time by a superior director with a superior script. Gagan Kang plays the spectre in Who’s There? in the menacing way numerous actors before him have done, but perhaps it’s not fair to judge him by this since it would have been tough to come up with any unique moves when the script just didn’t demand it. I think I’ll wait to see him in another film to figure out his acting skills. Kalpana Mathur does not have an impactful screen presence, but I suspect her acting may be okay in a better film. That apart, I must say I find it commendable that in a white-skin-obsessed film industry, neither she nor her makeup artist or director have tried to camouflage her deliciously dark skin with glaring lighting or pancake.
But the inadequacies of the lead cast pale into insignificance when you consider some of the amusingly bad supporting actors, the sub-standard production and lazy screenplay they are up against. The secret of a good thriller is that when the truth is revealed in the end, every piece of the jigsaw must fit somewhere. But it appears here that in thinking up ways to mislead and frighten the audience, Ejaz Ahmed (who also wrote the screenplay) forgot to tie up some loose ends. For instance, anyone who sees this film will know why I ask: why did blood/bloody water flow from that tap in that kitchen that night?
In the midst of all this mediocrity, it boggles the mind that the producers took the trouble to hire the services of singers Sunidhi Chauhan, Shaan, Udit Narayan and Kumar Sanu for Who’s There? While Narayan and Sanu are going through a low phase in their careers, Chauhan and Shaan are certainly not, which means getting them would have cost some money. Considering that the songs are not particularly memorable despite the presence of these heavyweights, perhaps it would have been a better idea to spend that money on a more talented music director. Or here’s an even better idea folks! How about going songless and using the money thus saved to up your production quality?!
Rating (out of five): -5 stars
CBFC Rating:                       A
Running time:                        115 Minutes
Language:                              Hindi
Rajbir’s photo courtesy: https://www.facebook.com/pages/Rajbeer-Singh/148453213183
Film still courtesy: http://whostheremovie.com/
Posted by Anna MM Vetticad at 10:13 AM