This is one of the tackiest celluloid takes on the Muslim community that I’ve seen in a while. And the fault does not lie with the film’s questionable production values alone. The basic issue is in the senseless storyline with its confused characterisation that makes Bas Ek Tamanna both silly and boring. 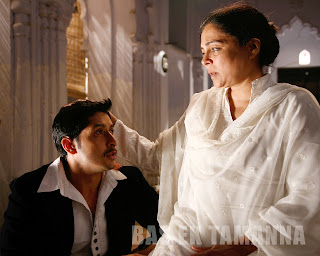 Since the entire story is detailed on the website (and by that I do mean the ENTIRE story apart from the final scene), I can tell you a lot without worrying about spoilers. Faraaz (Samir Aftab) earns a meager income as a tourist guide in Lucknow. His mother Najma (Reema Lagoo) uses her traditional embroidery skills to support the family while her wheelchair-bound husband worries about the boy’s future. Faraaz is in love with local girl Sanah (Gauri Karnik) who is a teacher. One day, a rich NRI called Sameera (Rituparna Sengupta) spots Faraaz and asks him to show her around his city. Something about this conscientious boy appeals to her and she offers him a job with her in Dubai. Faraaz gets engaged to Sanah before leaving town. His assignment is revealed to the audience when Sameera takes him to a Dubai hospital to meet a child who is shown strangling dolls as a pastime. We discover that this is her son Ahmed (Master Laeeque) who is suffering from bipolar disorder which, the doctor explains, has been brought on by the trauma of losing a parent. Sameera is a successful businesswoman, but money can’t buy her only child’s health. Or can it? She offers Faraaz a lucrative contract to stay in her house posing as Ahmed’s father to bring the child back to normal. 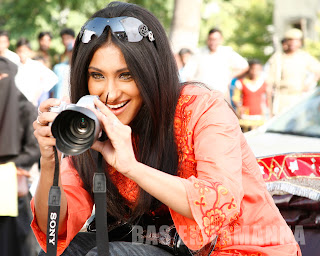 And so the story goes on. This film could have been something special but it’s hard to take it seriously when it’s so burdened with glaring loopholes, ham-handed dialogue writing, jerky editing in places, an uninspiring hero and pathetic acting by some of the supporting cast. We’ve all seen bad actors in our time but the man who plays the principal of Sanah’s school takes the cake, the bakery and the entire wheat field with it! Besides, there’s the completely inexplicable characterisation of the leading man. Faraaz is portrayed as a sensible, responsible boy, and yet once he gets to Dubai he simply cuts himself off from his family and fiancée. No reason whatsoever is given for his behaviour. If he didn’t want to reveal to his family the nature of the job he’d taken up with Sameera, he needn’t have told them, but why did he stop phoning them or taking their calls? The fuzziness of Faraaz’s character can be attributed to both bad writing and Samir Aftab’s average acting.

Reema Lagoo lends earnestness to the character of Najma Aapa, but what is an actress to do in such a mediocre film? As if there are not enough irritants in Bas Ek Tamanna, Vrijesh Hirjee as a fellow called Chulbul is thrown into the mix to provide that element that was as much of a staple in the old days as item numbers have become today: he is meant to provide ‘comic relief’ I guess, but the interludes involving him are irritating to say the least.

So where is all this headed? Well, it all comes down to a clumsy conversation towards the end about how the world has misunderstood the practice of multiple marriages among Muslim men. Oh how the awkwardness of the writing at this point made me cringe! No doubt director Rahul Kapoor and writer Ali Hashmat Siddique meant well. But subtlety in such matters can be achieved only when you get past the feeling of a “them” and “us”.

Let me clarify that Bas Ek Tamanna is too ineptly handled to be offensive. It’s no wonder that my only takeaway from this disappointing film is that Reema Lagoo has very pretty hands!