Do you think makeup and costumes are “merely” glamorous departments that contribute the least to a film’s depth and impact? Watch Rivaaz to know how wrong you are. This film about a village in North India that sells its daughters for a living makes a strange first impression with the styling of its female cast: at all times of day and night, all the young girls sport lehnga cholis that seem like they’ve been purchased from an upmarket boutique, impeccably done makeup, perfectly plucked eyebrows and hairstyles that seem like they’ve sprung from the scissors of Ambika Pillai or Jawed Habib. All except one girl who is known throughout the village for being bereft of beauty. And how does lack of looks in a woman get portrayed in a Hindi film? Arrey, you don’t know?! Simple! All you do is pick a dark-skinned actress, baba!!! 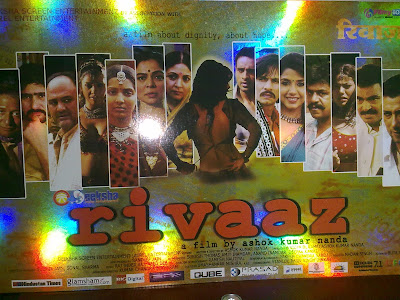 So right at the start, minus points to the film’s costumes-in-charge Sangeet Gaikar and to Sachin Bhonsle who is credited for the makeup. Don’t get me wrong. I’m not saying that girls in Indian villages don’t ever dress to the nines – after all, I’ve got cousins in the Kerala countryside who could teach Dilliwaali me a thing or two about fashion! All I’m saying is that no woman can be so perfectly done up 24x7, that some work can only come from high-priced urban salons, and if you position yourself as a realistic film then you’d damned well get it right in every department.
You may assume then that this is one of those films illustrating the point that good intentions don’t necessarily translate into good films. In the case of Rivaaz though, I’m slightly confused about the film maker’s intentions in the first place. The film’s hero Rahul (Manoj Biddvai) sees Bela (Ritisha Vijayvargiya) in the very first scene and is in love. Not attracted, not smitten, not infatuated, people! He’s in lowwe! I can swallow love at first sight in a romantic comedy but somehow his puppy dog willingness to risk life and limb for this girl who means nothing more than a pretty face to him is irritating, their romance is downright silly and this is one of the many ways the film seems to trivialize the issue at hand.
That issue being the practice of living off the bodies of their daughters that is the custom in this unnamed village in north India. I’m told this village is a reality, not a figment of director and co-writer Ashok Kumar Nanda’s imagination. This film then should have shocked me out of my wits, but it made me laugh in places instead. The lack of sincerity shines through from start to finish but is never more evident than during the mandatory item number. Yes, Sambhavna Seth makes an appearance surrounded by salivating men, jiggling her booty to a song that goes: “Agre ka ghagra, Dilli ki chunari / Jaipur ki choli pehenke jo nikli / Saara hiley hai / Saara hiley hai UP-Bihar / Laalu maange hai chumma udhaar.” http://www.youtube.com/watch?v=FTewSg2I-H0&feature=related
Pulling Rivaaz down further is the inconsistent acting. Veteran Deepti Naval as Bela’s mother and Reema Lagoo as the virgin-hungry Thakur’s wife do their best to lend some credibility to the proceedings as does Meghna Naidu who plays the most ordinary looking girl in the village. But the lead pair don’t have the depth to extract any sympathy from the audience. And Shadika Randhawa who plays the lowwe interest of the village pimp has more makeup on her face than expressions! The dialogue writing is amateurish and the speechifying at the end is beyond endurance.
This is a story that needed to be told. But telling it this way is worse than not telling it at all.
Rating (out of five): 0 stars
Language:                              Hindi
Photograph taken from the cover of the film’s brochure
Laalu maange hai chumma udhaar video courtesy: Youtube
Posted by Anna MM Vetticad at 10:25 AM