Raj, Yogi and Vikram are married men whose life’s mantra is infidelity. Raj deceives his gullible wife with promises of undying love. Vikram tramples upon his lady at every opportunity he gets. And Yogi has been tossed around by his spouse ever since she discovered him with a lover. The three men are buddies, so are the three women. When Raj’s wife Sanjana suspects him of fooling around, she hires a detective to pin him down. The sleuth Kishen (Akshay Kumar) complicates matters further by falling for the beatific and beautiful Sanjana. 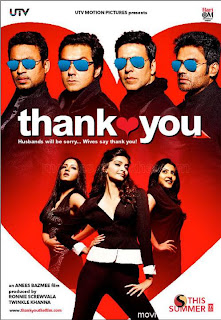 Thank You is good for some laughs if you can forget that it’s offensive to women or that Bollywood has made several multi-star-cast comedies on the theme of adultery this past decade. Director Anees Bazmee’s No Entry was far funnier than his latest offering. It too featured three cheating husbands + three unhappy wives, one of them as credulous as Sanjana. Perhaps since critics are bound to point out the similarities between the two films, Bazmee has inserted a scene in Thank You in which a character is watching No Entry. Technically then, am I supposed to call this the director’s ode to his previous megahit or just a lack of fresh ideas? You decide the answer to that one. What I will tell you is that other Hindi films on the same subject are flooding my memory as I write: Shaadi No. 1, again with a triumvirate of married couples and Sanjay Dutt in a role similar to the one played by Akshay in Thank You; David Dhawan’s disturbingly bad Govinda-starrer Do Knot Disturb; Masti which too was about a trio of duos … feel free to add to the list ...
But as I said, despite the feeling of having been there and seen all that before, I did find parts of Thank You funny. The actors all acquit themselves reasonably well, Suneil Shetty is particularly hilarious, and Irrfan is so good that I’d love to see him in other, hopefully more original comedies. I say all this despite the fact that the film slows down in patches, is too long and has a dull soundtrack; the repeated references to the flute-playing Lord Krishna are too meaningless to even be called pretentious; Celina Jaitley disappears for a large part of the film in such an inexplicable fashion that it almost seems like the actress fell out with the film maker or didn’t give him sufficient dates; Mallika Sherawat’s much-hyped item number is completely impactless; there is no particular reason for the film to be set in Canada and not India; Akshay’s character’s sexually promiscuous ways are forgotten completely by the scriptwriter in the end; his interest in Sanjana too is entirely – and inexplicably – axed from the climax.
Lazy scripting apart, what is completely unfunny about Thank You is its attitude towards fornicating husbands, so similar to the other films I just listed in its league. Little has changed in Hindi cinema since the 1981 film Ek Hi Bhool in which Jeetendra played an adulterer who demands to be forgiven for his “ek hi bhool” (just one mistake) by his wife (Rekha). That film regressively painted the wronged woman as an unforgiving, stubborn creature who had the audacity to be offended by her pati parmeshwar’s sins … oops, just one sin. Thirty years later in Thank You, tokenism towards political correctness comes in the form of a long lecture about suffering wives that Kishen / Akshay delivers to the deceitful husbands. But just to be sure that the film doesn’t offend the sensibilities of its primary target audience, Kishen also describes the men’s penchant for bed-hopping as “ek chhoti si aadat”.
When I entered the hall to watch Thank You first day first show, I was taken aback to see a virtually all-male audience. As the film rolled on, I began to understand the gender imbalance in the crowd … The men in that theatre laughed their guts out every time the sadistic Vikram was mean to his wife, ordered her around and treated her like hired household help. They burst into peals of raucous thigh-slapping laughter whenever one of those celluloid husbands was unfaithful to his wife and successfully covered up his treachery. They then fell silent when Akshay lectured the womanising boys about the price of faithlessness. But the energy in the theatre returned when Akshay uttered those reassuring words “ek chhoti si aadat” and Vikram described his need to be with his wife, not in terms of his affection for her, but thus: “jabse yeh aurat meri zindagi mein aayee hai, meri kismet badal gayee hai.” Ah, that whole ghar ki Lakshmi phenomenon. My fellow viewers in the hall could understand that! The order of nature had been restored! All was well with the world! Thank you!
Now tell me Mr Bazmee, would you have the courage to make a comedy about man-ising wives in which female philanderers too are absolved this easily? I suspect not. Do prove me wrong.
Rating (out of five): **1/4
Post-script: My dear gentlemen readers, I DID NOT say the hall in which I watched Thank You was filled with gentle folk like you J