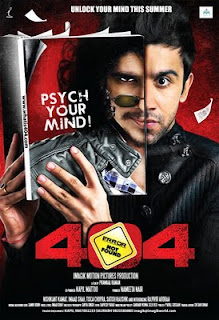 Hindi films are in a mood for paranormal activity these days. After Vikram Bhatt’s Haunted (3D) and Pavan Kirpalani’s Ragini MMS, comes 404 Error Not Found. The film is directed by Prawal Raman who has earlier been associated with the horror/wacko short story compilations Darna Mana Hai and Darna Zaroori Hai. Like those two films, 404 too is a mixed bag of goods that achieves quite a bit despite its weak points.
404 is set in a medical college at the start of an academic year when new students are being broken in by their seniors. When fresher Abhimanyu complains to the authorities, the ragging worsens for him and his roommates. He decides to move into a separate room so that his friends are not victimised. The choice of room is pivotal to this story: No. 404 which has remained locked for three years, since its last occupant committed suicide. The college administration hands the key over to Abhimanyu reluctantly because of the rumours that had prompted them to shut it off in the first place. Abhimanyu for his part is a rationalist who is determined to prove to his fellow students that ghosts don’t exist. But the ragging takes an unprecedented turn when the seniors who he had angered decide to hypnotise him into obsessing about the dead boy.
It’s heartening to see Bollywood experimenting with such an unusual storyline. 404 blends the supernatural and the rational, psychiatry, academia, mental illness and ragging so seamlessly that in the end you are not sure whether what you are seeing is what you are seeing or a figment of a character’s imagination.
None of this would have been possible without the choice of location and Savita Singh’s cinematography which manages to build up the college campus as an eerie, vast space with unending corridors, intimidating stairwells, high-ceilinged lecture halls and enough roominess to spook anyone. Except for a couple of occasions, the background score doesn’t fall into the usual trap that most Hindi horror thrillers have found inescapable in the past decade or so: it’s not too loud and it does not feel manipulative. And wonder of wonders, IF there is a ghost in this film – and I’m not saying there is, I’m not saying there is not either – then that ‘ghost’ is not a cackling female figure in a white sari with long black hair partially falling over her glazed eyes! Yes yes, I do intend to kill you with the suspense that sentence creates. And if this were a tweet I’d place a winking emoticon right at this point!
The actors are a talented bunch. Newcomer Rajvvir Aroraa effectively underplays the traumatised fresher. Imaad Shah as the heartless senior has just the right swagger for the part. Satish Kaushik is convincing as the sympathetic college staffer who has the courage to admit that he won’t dismiss ghost stories outright. Most interesting of them all is Nishikant Kamat who Hindi film audiences have known so far as the director of Mumbai Meri Jaan. While playing Abhimanyu’s well-meaning though slightly pompous professor, he is remarkably easy before the camera; so easy, that I’m willing to forgive him for that sole mucked-up scene in which he fearfully tip-toes into a room, but ends up looking more comical than pathetic.
Unfortunately, despite all the right ingredients, 404 Error Not Found does not entirely come together. While there are portions that are frightening, some that are fascinating because of their open-endedness, there are also places where the film risks losing its grip on the viewer. One problem is the verbosity of Kamat’s professor which demands too much of an attention span from the viewer: the man just doesn’t seem to stop talking and some of his dialogues are written more like lectures than natural conversations! The too-clever-by-half title doesn’t work either. Perhaps in a bid to make the college campus as unnerving as possible, it’s presented to us with nary a human being in sight except for the main players in our story. Just as unconvincing is the fact that the college faculty – who are portrayed as a benevolent bunch – do precious little as a student appears to sink further and further into a severe mental ailment. And no, it’s not okay to bring up a bipolar patient’s “manic phase” in passing, treating it as nothing more than a missing piece of a puzzle in a mystery story: I’m not asking for a thesis on bipolar disorder, I’m just saying there is little awareness about mental illnesses in our country and it’s not acceptable to leave the audience to play guessing games on a subject as serious as this (a lady seated right behind me while I was watching this film was loudly speculating about whether the reference was to Alzheimer’s disease … I rest my case).
But as I weigh the pros and cons of 404 Error Not Found, it’s impossible to brush it aside. Because the film does raise interesting questions as it fuses multiple themes: Where does fun end and danger begin in ragging? If academic research is done at the cost of a single human life, is it acceptable to casually shrug off the sacrifice as “collateral damage” for the greater good of society? And here’s the part that puts me in the same frame of mind as when I saw the ending of Manoj Night Shyamalan’s Sixth Sense: if you do watch 404 Error Not Found, do write to me and tell  me whether you saw what you saw or what the professor saw or what Abhimanyu saw? Now if this were a tweet I’d once again place a winking emoticon right at this point.
Rating (out of five): **3/4
CBFC Rating:                      U/A without cuts (the film was initially offered an A certificate, but was subsequently changed to U/A by a review committee)
Running time:                        118 Minutes
Language:                              Hindi
Photograph courtesy: http://tinyurl.com/3l7hjul (via Facebook)