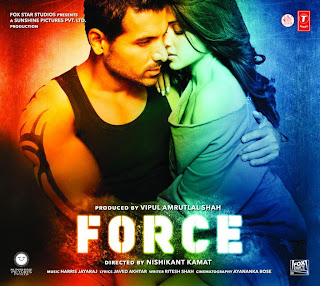 I was apprehensive as I entered the theatre to watch Force. After all it’s a remake of Gautham Menon’s engrossing 2003 Tamil blockbuster Kaakha Kaakha which starred Surya Sivakumar – who is an adjective unto himself – and the vivacious Jyothika. Could Nishikant Kamat, John Abraham and Genelia D’souza possibly match up?
Before we answer that question, a quick look at the story for those who’ve not seen the original film. Mumbai policeman Yashvardhan (Abraham) believes that his dedication to his work comes from his family-less life: no commitments and no relationships mean he has nothing to fear. Things change when he ends up falling for Maya (D’souza) in spite of himself. Meanwhile, on a parallel track, a specialised task force headed by Yash invites the wrath of drug lord Vishnu whose brother they’d killed. Force takes us through Vishnu’s quest for revenge against the quartet while their personal lives play out in the background.
To answer the question on the minds of all Tamil film buffs: yes, Force is a very faithful re-telling of Kaakha Kaakha. In fact, one major irritant for me came in the form of the writing credits which read “Story by Ritesh Shah, inspired by the Tamil film Kaakha Kaakha”.  Oh c’mon, so if I translate Romeo & Juliet into Hindi, would I say “Story by Anna M.M. Vetticad, inspired by William Shakespeare’s English play”?!
I guess it counts as progress that a Hindi film industry more used to blatant lifts is now increasingly being constrained to at least acknowledge its sources, because of greater public awareness and media pressure. With that in mind let’s return to our review. Nishikant Kamat and his action director Allan Amin need to be lauded for the high drama that is Force’s forte. The chases and fights are so well-choreographed that I found myself holding my breath through each one of them. Add to that Harris Jayaraj’s heart-stopping background score, beautiful locations, the ever-reliable Ayananka Bose’s cinematography and Aarif Shaikh’s razor-sharp editing, and what we get is a slick and absorbing cops-and-robbers saga with positives that overshadow its flaws.
Of the able supporting cast, a special mention must go to an interesting new actor called Vidyut Jamwal who plays Vishnu, Mohnish Bahl as Yash’s colleague and Sandhya Mridul as his feisty wife (“go lose your virginity”, she tells Yash on his wedding day). In fact, the camaraderie between the policemen, their wives and girlfriends is quite touchingly potrayed.
The film’s weakest link is the casting of its heroine. Genelia D’souza is a sweet looking girl, but has her limitations as an actress. She also does not have the screen presence to match John Abraham’s charisma which at least in this film required a leading lady who could match the man Centigrade for Centigrade. Abraham himself is no Surya in the acting department, but he is oven hot and there is an inherent sincerity in his personality that’s hard to resist. Interestingly, at 38, his face shows his age but unlike several of his industry colleagues, he looks remarkably and refreshingly un-Botoxed and un-cosmetic-surgeoned – a real man despite that unbelievably unreal hot bod. Besides, Kamat is wise enough to play on Abraham’s strengths – the charming smile, the warmth, the intensity – and ends up extracting a career best performance from the star.
But where he fails is in summoning up any chemistry between the lead pair. The loveliness of Kaakha Kaakha was in the romance between Surya’s Anbuchelvan and his beloved. When the villain tries to hurt her, Anbuchelvan’s pain was our pain. Jyothika played Maya as a bubbly free spirit, but she avoided crossing the line from cute to cutesy. Abraham and D’souza, however, come across as a torrid-looking dude and a doll, a man and a girl, not an adult couple hopelessly in love. It’s all very sweet to begin with. When Yash spots Maya one night through his rain-spattered windshield, he turns on the wiper to get a clearer view. And D’souza is actually quite appealing in the scene when Maya first tells the reticent Yash that she loves him and later when she’s sexually forward with him. “I want to make love to you,” she tells him, a line Bollywood heroines rarely utter, and when he hesitates to kiss her, she hastily clarifies, “Main under-age nahin hoon!” But post interval, every time Maya appears on screen, the film dips.
Perhaps that’s why Kamat has pared down the romance considerably, throwing it in occasionally between powerful action sequences. Force does not have the emotional resonance of Kaakha Kaakha or this director’s own Mumbai Meri Jaan. But boy oh boy, the action is a killer!!! A beefy policeman lifts a motorbike with his bare hands and flings it on a thug. A lone cop chases an unknown villain unrelentingly one night over cars and bridges, railway tracks and trains, and it feels like they’ll just never stop! A gangster rips the bandage off a policeman’s bullet wound and grinds his wrist into it! A policeman impales a bad guy on a meat hook!
So then this is a high-adrenaline, action flick that deals with the dilemmas of honest policemen. Interestingly, Yash does believe in letting his fists or bullets do the talking in cases where he knows the law will be silent, but Force is not a justification of police atrocities. Vishnu even tells Yash that he’d never have sought revenge if Yash had allowed the law to take its own course. Equally interestingly, the killing that sparks off Vishnu’s marauding mood is actually an act of self defence. The film has its flaws no doubt … but attention all adrenaline junkies, Force is in town!
.
Rating (out of five): ***1/2
CBFC Rating:                       U/A without cuts
Running time:                        130 Minutes
Language:                              Hindi
Photograph courtesy: http://www.forcethemovie.com/
Posted by Anna MM Vetticad at 4:23 PM