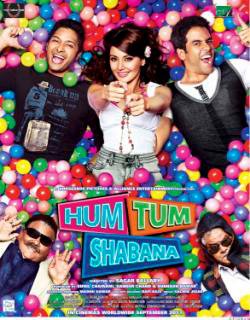 When I made a promise on this blog at the start of the year that I would not miss a single Hindi film released in the National Capital Region in 2011, I don’t think I realised what I was setting myself up for. But to quote Salman Khan’s refrain from the film Wanted and then take it further “with a little help from my friends”: “Ek baar jo maine commitment ki, to apne aap ki bhi nahin sunti. Doosri baar commitment ki to apne baap ki bhi nahin sunti. Aur teesri baar commitment ki toh RAJINIKANTH ki bhi nahi sunti.” (Line 2 – courtesy a Delhi radio jockey who I heard in passing, Line 3 – courtesy @trishul3 a.k.a. Trishul R.S. from Twitter).
So – since I skipped the press preview of Hum Tum Shabana (HTS) because I was tied up, and since I didn’t get the time to watch it on Friday and Saturday either – here I am on Sunday, typing up a gale of words on my computer after having watched the film earlier in the day. To borrow a line from another film that I won’t denigrate by naming it in the same breath as Hum Tum Shabana: jo vaada kiya, woh nibhana padega! Sigh!
Hum Tum Shabana is the story of two rivals in love. Karthik Iyer (Shreyas Talpade) and Rishi Malhotra (Tusshar Kapoor) work for an event management company that’s organising a beauty pageant in which Shabana Raza (Minissha Lamba) is a contestant. Their competition for her affections takes them all the way from the catwalk in Goa to her gangster uncle’s home in Mumbai. The uncle in question is a vile, violent fellow who has a penchant for slapping himself when he’s angry and smacking others to show affection. To win Shabana – torn as she is between Karthik and Rishi – the boys are ordered to train in an academy for the underworld (ha ha ha!) and pass an exam. There you go, that’s the précis of the story.
Director Sagar Ballary is the man who brought us the sleeper indie hit Bheja Fry in 2007 that became Vinay Pathak’s calling card in the profession. His Bheja Fry 2 earlier this year was dismissed by most critics and viewers, but I’ll confess I thought even that was good timepass. To say I didn’t laugh AT ALL during Hum Tum Shabana would be a lie … I did laugh … Precisely 10 times … Yes, I counted with tally bars! … That’s how bored I was! Whatever happened to your easy sense of humour, Mr Ballary?
HTS’s witless script and unoriginal dialogues are not its only problems. The film is unintentionally funny when its casting choices present Minissha Lamba to us as a credible Indian beauty pageant contestant. Please don’t get me wrong – I don’t believe in making personal remarks. But just as I’d be unconvinced if any Indian film served up a serving defence services officer with dreadlocks and earrings, so too I’m unconvinced when I’m shown little Minissha on a ramp in the midst of tall, willowy, svelte women who end up making her regular-girl-type, petite figure seem stocky in comparison.
HTS’s bankruptcy of ideas is evident from the fact that Karthik contaminates Rishi’s mouthwash in the film, causing him to lose his voice, thus giving Tusshar Kapoor the opportunity for a few minutes to reprise his speech-impaired character in the superhit Golmaal film series. Worse, the moment I heard the film’s signature song Ke music band na karo on the radio a few weeks back, it gave me a sense of déjà vu. The musical style and the tone of the lyrics felt too much like a hangover of Chaar baj gaye lekin party abhi baaki hai from the film Faltu earlier this year. HTS offers us a second song that just rejigs the subsequent lines of Char baj gaye that go “Hey Mr DJ, mera gaana please play. Aaj no wine, aaj no lager, aaj piyenge champagne.” In HTS that becomes: “Thank you Mr DJ, thank you for this song. Thank you to the baby (or at least that’s what it sounded like to me) for dancing all night long.” Now that I’ve done my research for this review, whaddyaknow, I discover that Sachin-Jigar of Faltu are the music directors of HTS too!
Not surprisingly, those 10 laughs that I did have in the film were elicited by situations involving Shreyas Talpade, Sanjay Mishra and Satish Kaushik, all three of them natural comics who deserve better than this film and have certainly done better in the past. The only member of the cast who comes off looking good is model Pia Trivedi in the role of Shabana’s bitchy fellow contestant. Either she’s playing herself completely, or she’s got a genuine spark and I’d like to see more of her in the future.
Before I wrap up, my profuse apologies to the amorous couple who clearly became self-conscious as soon as I took my seat in the last row of which they’d been the only other occupants until then in a near-empty hall. I didn’t have the presence of mind to switch rows. The result … I spent Rs 225 and two hours-plus on this film and didn’t get my paisa vasool. Because of me, they didn’t either. I’m truly sorry!
Rating (out of five): *
CBFC Rating:                       U/A without visual cuts, but with several words muted
Running time:                        125 Minutes
Language:                              Hindi
Photograph courtesy: https://www.facebook.com/#!/Hum.Tum.Shabana
Posted by Anna MM Vetticad at 7:58 PM