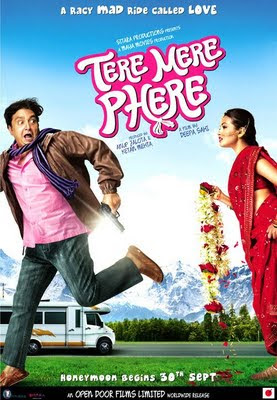 They’re completely in love. But when he makes coffee for her, he leaves a mess behind. When she sees the mess she screams at him. After a bath, he dumps his wet towel on a chair. She spots the offending cloth and screams a little more. Before you know it they’re barely on talking terms.
It’s a familiar story of a loving relationship gone awry, that is always interesting in the re-telling. But Tere Mere Phere fails to make sense because the fraying of the lead couple’s ties happens not over several years of marriage but during the first few days of their honeymoon! And you know what, the heroine’s high-pitched nagging is such a challenge to the ears that when the husband asks her, “Tum itna chillaati kyun ho?” I wanted to add my voice to his complaint.
Actress Deepa Sahi makes her directorial debut with a film filled with potential that it fails to live up to. Pooja (Sasha Goradia) and Rahul (Jagrat Desai) are a squabbling couple on their honeymoon, riding their trailer truck through scenic Himachal Pradesh. Along the way they pick up Jai (Vinay Pathak) who hitches a ride with them at gunpoint since he’s desperate to reach his lady love before she’s forcibly married off to someone else by her family. As Rahul and Pooja incessantly yell and throw barbs at each other much to Jai’s exasperation, we’re told their love story in flashback.
From the very first scene it’s clear that this film is meant to be a farce. Everyone is deliberately over-acting, especially the lead pair and the boy’s mother played by the delightful Sushmita Mukherjee who deserves a lot better than the film industry ever offered her. The early scenes of the family’s shenanigans at a wedding – so typical of the behaviour of guests at large Indian shaadis – are genuine rib-ticklers. But pretty soon, the joke is on us as the film degenerates into unbearable loudness and a ceaseless series of relationship improbabilities. Sample this: Rahul is a nice guy in love with his bride, but when they pick up a hitchhiking couple, he is immediately ensnared by the charms of the lady who openly flirts with him in Pooja’s presence. During a phase when couples are usually trying to cover up their flaws and present their best side to each other, these two seem determined to do the opposite.
I’m not sure why Sahi felt the need to crunch the complete degeneration of a relationship into such a short time span. If she hadn’t, she might have had an interesting film to offer us. Desai and Goradia may actually be good in a better film, but in Tere Mere Phere their exaggerated sparring becomes terribly unfunny and insufferable beyond a point. Vinay Pathak has nothing new or remarkable to offer us in this film. And after pitching in a surprisingly good and understated performance in Rituparno Ghosh’s Bengali film Noukadubi earlier this year, Riya Sen as his supposedly rustic girlfriend is nothing more than a pretty presence with an inexplicably westernized accent in the film.
The one major plus point of Tere Mere Phere is the way it explores spectacular Himachal Pradesh in ways that Hindi films have not done before. A thumbs up to the cinematographer for doing justice to the state’s beauty. A thumbs down to the film though!
.
Rating (out of five): *1/2
CBFC Rating:                       U/A without cuts
Running time:                        124 Minutes
Language:                              Hindi
Photograph courtesy: http://en.wikipedia.org/wiki/Tere_Mere_Phere

Posted by Anna MM Vetticad at 2:09 AM