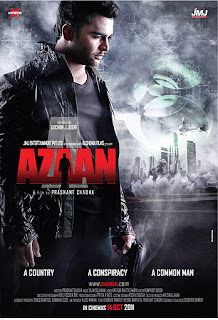 Azaan is the film I was really looking forward to this week. The trailers have been showing us some world-class action; and the theme is both international and relevant to our times.
But Azaan reminds me of a lesson I learnt years back – that the human body is an apt metaphor for films; even the most beautiful physique is nothing but a well-sculpted mass of flesh if the heart does not beat and the blood does not flow. And I’m afraid the heart just does not beat in this film.
This is the story of two little boys Azaan and Aman who choose different paths when they lose their loved ones to political violence. One grows up to become a terrorist, the other a secret agent trying to bust terror networks. India is the target of a vicious scheme of biological warfare being hatched by a foreign power, and Agent Azaan Khan seems to be the only one who can stop it.
The locations are real (the film’s official website tells me it was shot in eight countries – Germany, Morocco, France, India, Poland, Thailand, China, South Africa). And thankfully, for a change we have competent international actors playing foreigners here, unlike the embarrassingly bad extras we’re more used to seeing in Hindi films. In fact Azaan has most elements in its package in place: top-notch (and I suspect deliberately sparse) cinematography by Axel Fischer, production design by Priten R. Patil that transports us to the various countries Azaan visits not just with street shots but through every room and cave that you see him in, a grey-black colour scheme that I assume signifies the barrenness of Azaan’s emotional life, a sepia-toned flashback to Azaan’s memories of his childhood in a golden desert, a telling background score, at least two nice songs and some classy action.
Now if only as much time, money and energy had been spent on the screenplay and dialogues. And if only hero Sachiin J. Joshi, who plays Azaan, could act. The moment Joshi opens his mouth, you realise that his histrionics are restricted to that perfectly worked out torso. His expressionless face combined with ineffective dialogue writing ring this film’s death knell. Why, for instance, does he translate his Hindi lines into English when he first meets the beautiful Moroccan sand artist Afreen (Candice Boucher). “Yeh kahaani meri hai,” he says after a rather nicely done scene in which he watches her tell a tale of two brothers through the medium of her sandwork; he immediately follows that up with, “That story is mine,” and then adds, “Yeh kaise khatam hogi? How will it end?” No no, for the nth time, we Indians don’t talk like that!!!
This is particularly unfortunate because the film gets a couple of other things right on the dialogue front: many of the foreigners are shown speaking naturally in their own mother tongues, while subtitles in both English and Hindi appear on screen.
Of the rest of the cast, Alyy Khan as an Indian Intelligence official is suitably suave and intimidating, and Boucher is pretty but shares zero chemistry with Joshi. She has a lovely body, no doubt, but I wonder why the director chose to show her lying alone on a beach and gyrating about in the sand to signify that moment when she has sex with Azaan. Might have made more sense to show them getting some plain old-fashioned action between the sheets, don’t you think?
Perhaps that scene typifies what is wrong with Azaan – the production values are slick, everything and everyone looks pretty and/or neat and well-shot and well-made-up and stylised, it’s evident that big money has been invested in the packaging, but it lacks heart and soul and a spark.
In Steven Soderbergh’s recent film Contagion, when US scientists finally find a cure for a mysterious viral infection that is killing millions across the world, I found myself actually heaving a sigh of relief because the director managed to draw us so effectively into the painful and time-consuming battle that was being fought by the film’s various characters. But when India manages to find a cure for the virulent epidemic that strikes in Azaan, I felt nothing.
Rating (out of five): **
CBFC Rating:                       U/A without visual cuts (the Censor Board asked for the word “China” to be muted)
Running time:                        140 Minutes
Language:                              Hindi and various other languages
Photograph courtesy: http://www.aazaan.com/
Posted by Anna MM Vetticad at 7:30 PM