There are some films that are so good that you are dying to write about them. There are some that are bad to the point of being so hilarious that you are desperate to share your trauma and/or laughter with the world. And then there are those middling films – the ones from which you have no particular expectations so it’s not even that you’re disappointed and upset.  They’re just dull. These are the ones for which you need to really motivate yourself to write a review. 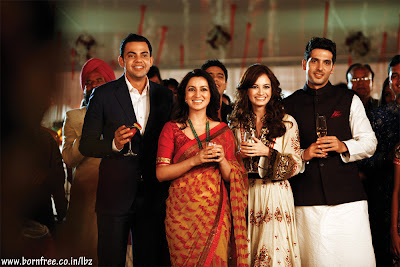 Love Breakups Zindagi (LBZ) is one such film. Between the time I watched it on October 4 and today, I’ve actually reviewed more than half a dozen films. If I hadn’t sworn to myself and my readers that I wouldn’t miss a single Hindi film on this blog this year, I suspect I wouldn’t have bothered to write about it. But I did make that promise and the film happens to have survived a second week, so here goes.
LBZ stars Diya Mirza and Zayed Khan as Naina and Jai, who are in separate long-term relationships at the point that the film starts. Naina’s boyfriend is a career-minded man who doesn’t know how to let his hair down, and has little interest in or consideration for her passions and dreams. Jai’s girlfriend is a control freak. The two meet at a wedding in Chandigarh where the groom is his best friend and the bride is hers. They strike up a rapport and their easy chemistry sets them both thinking about their individual relationships. Also at the wedding is Jai’s much-divorced friend Govind (Cyrus Sahukar) who falls in love with the bride’s aunt Sheila (Tisca Chopra).
So here’s what I liked about LBZ:

1. Diya Mirza is gorgeous (since I’ve met her, I can tell you that the true extent of her beauty does not come across on celluloid.).
2. Diya Mirza has a glowing skin

3. Diya Mirza has been styled beautifully for this film and wears lovely clothes throughout
4.

Unlike the other older woman-younger man relationships shown in Hindi films so far, the writer and director of LBZ have taken Govind & Sheila’s romance all the way. They don’t chicken out and, for instance, kill off the older woman like Farhan Akhtar did in Dil Chahta Hai.
5. Farida Jalal as the groom’s grandmother is as irresistibly charming as she always is. 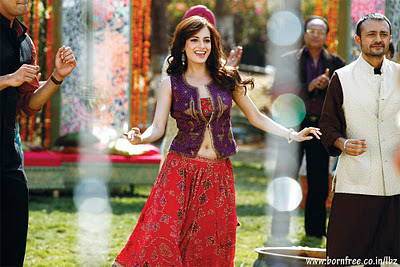 That’s it. Can’t think of anything else. Now for what I didn’t like about LBZ:
1.    There’s nothing about the Naina-Jai romance in this film that’s not predictable. Nothing! Even the flaws in their respective partners are so clichéd!
2.      It’s the sort of literal film where if a character says he’s travelling, he is shown at the airport getting his boarding card, then boarding the flight, then we are shown a shot of a plane in the clouds … Not once, but each and every time.
3.     Since a product placement deal was evidently worked out by the producer, zero imagination is used in the way LBZ hardsells Jet Airways to us – yes, the aforementioned boarding cards and aircraft are all from Jet Airways!
4.      It’s the sort of film where they feel the need to establish their presence in a city by showing characters walk past famous architectural landmarks for no logical reason because of course they couldn’t think of any other way of capturing the mood of a city. So when Jai goes to Mumbai on work, he and Naina pass the Gateway of India. But funnier still, Govind and Sheila on a date in Delhi are shown walking casually by the Rashtrapati Bhavan. Does this director have no knowledge of lovers’ hangouts or security measures in Delhi?!
5.  There’s a terribly tacky D’décor product placement and a guest appearance by the brand’s ambassador Shah Rukh Khan who comes off looking tired beyond recognition.
6.     Perhaps it’s too late for this, but Zayed Khan really needs to take some acting lessons. The youthful charm that was in evidence in Main Hoon Naa may have been sufficient to pull him through a supporting role but is certainly not enough for a film in which he’s the main male lead. Diya Mirza may not have managed to achieve star status in the industry, but she still deserves better.
7.      LBZ is tacky and unprofessional. For instance, there’s a character called Pinkoo who must have been someone in the original script, but whose significance was edited out completely at some point. And so, we see this person in numerous random shots of the wedding, but he doesn’t have a single line to deliver. The editor, however, forgot to snip out a brief scene in the middle of the sangeet when someone says, “Pinkoo kaha hai?” and this non-speaking character is shown dancing vigorously on stage. But Pinkoo kaun hai? The director simply forgot to tell us.
I could go on and on, but I guess I’ll just save myself the time … because it all adds up to just one point: that Love Breakups Zindagi is one hell of a shoddy film!
Rating (out of five): 1/2 (this half star is primarily for Diya Mirza’s complexion & clothes)
CBFC Rating:                       U/A without cuts
Running time:                        152 Minutes
Language:                              Hindi
Photograph courtesy: http://www.bornfree.co.in/lbz/
Posted by Anna MM Vetticad at 6:01 PM