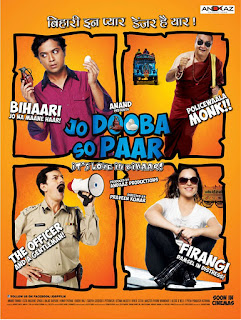 “There’s nothing more dangerous than a Bihari in love,” says this film’s clever tagline. Well, I can think of a few things far more dangerous: like a film that’s unusually short by Bollywood standards, yet even its 1 hour 40 minutes running time feels tedious; like a good concept that translates into a lifeless, purposeless film marked by ordinary writing, lackadaisical editing and weak direction.
I can almost imagine the concept that captured the producer’s interest: a laggard in the Bihari hinterland falls in love with a visiting firangi mem student who is there to study Madhubani paintings, and risks his life to save her when she is abducted by a local gang. Unfortunately, the idea and execution are separated by a gap as wide as the Pacific. And so a competent actor like Anand Tiwari, playing the protagonist Keshu, hangs about sporting an appropriate Bihari accent and entertainingly appropriate clothes, while wide spaces yawn between the few funny moments in this film. Tiwari has already made his mark in the Jaago Re ad campaign and playing the geeky, small-town boy in love with Sonam Kapoor’s protégé in Aisha. But even veteran actors need good scripts, directors and editors to carry them through, and sadly for this newcomer, he has none of the three at hand in this film. To make matters worse, the mem he falls for is played by an actress who makes the white policemen in Kurbaan and Kites look good.
Sadly, Jo Dooba So Paar, It’s Love in Bihar seems interesting at the start. There’s an appealing realness to the way it captures a Bihari small-town atmosphere. Keshu’s truck driver father lectures him on his wayward ways, while he himself surreptitiously transports guns and grenades along with legitimate goods. The conflict between father and son had as much potential as the romance but neither is well fleshed out. There are a few brief enjoyable moments in this unusually titled film. They come courtesy Keshu’s amorous mother who is twice shown using sex to divert her angry husband’s attention away from their erring son. There’s a tiny scene in which that delightful young actor Pitobash (who we’ve seen earlier this year as Mandook in Shor In The City and Laptan in I Am Kalam) does a mock sexual dance to tease his friend Keshu.
Hmm, three scenes in an entire film?! … Jo Dooba So Paar is not even one of those films that’s so bad that it becomes entertaining. It’s just so dull that you wonder why anyone bothered to make it.
Rating (out of five): *
CBFC Rating:                       U without cuts
Running time:                        100 Minutes
Language:                              Hindi
Photograph courtesy: https://www.facebook.com/#!/loveinbihar
Posted by Anna MM Vetticad at 12:23 AM