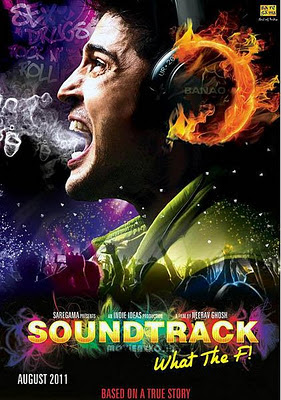 Before anything else, may I just say how grateful I am to the producers of Soundtrack for not embarrassing us as a nation like Bollywood so often does and for doing what their colleagues in the industry rarely do … buying the rights to remake a film instead of slyly copying and claiming originality. Soundtrack is based on It’s All Gone Pete Tong, an English film about a talented and whacked-out deejay who turns deaf.
Rajeev Khandelwal plays DJ Raunak Kaul who allows his life to be taken over by drugs, alcoholism, cigarettes and other body-destroying vices. But his music is brilliant, he becomes an instant rage among Mumbai’s nightclubbers and so no one really cares that he’s ruining his life until he starts losing his hearing. Raunak’s friends and colleagues realise there’s something wrong only when his creativity takes a beating. When a man can’t hear, how can he make music and assess its quality? I won’t give away the techniques Raunak devices to overcome this life-changing hurdle … all I’ll say is that it’s such a wonderful change to see a Hindi film about a person with a disability that does not over-dramatise or romanticise the tragedy but handles it with empathy and good humour. It’s not quite in the league of Nagesh Kukunoor’s beautiful film Iqbal, but it’s very nice all the same – there’s little rona-dhona here, just life.
Khandelwal is lovely in Soundtrack. After his commendable performance as an insatiably aggressive policeman in Bejoy Nambiar’s Shaitan earlier this year, here’s another job well done. Not a single scene is over-acted, not a shot over-done. But it’s not his acting alone that is impactful here. The film’s casting directors should be lauded for picking an actor who doesn’t fit the stereotype in some people’s minds of what a drugged-out deejay would look like … this guy is neat, handsome, clean, clean-shaven and ever so … nice!
More good casting and good acting … Soha Ali Khan is wonderful as Gauri, the woman who helps Raunak lift himself out of the abyss of depression that he plunges into when he loses his hearing. I’ve often found Mohan Kapur too over-the-top for my taste, but he’s just right as Charlie the loud music producer who gives Raunak his first break. In the middle of so much sensitivity, it hurt to hear Charlie introduce Raunak to a concert audience as “the man who makes handicapped people look cool”, but I could imagine a real-life character like Charlie speaking precisely those words … full marks to the dialogue writers. The music of this film is as unusual for Bollywood as is this storyline. I particularly like Raunak’s signature tune Jhoom fakira that makes him a star and the use of oldies Ruk jaana nahin, Yeh jeevan hai and Khullam khullam pyaar karenge hum dono to demonstrate the man’s changing attitude towards life.
There’s so much to praise in Soundtrack that I find myself putting off the part of this review where I tell you what’s wrong with it. Ah well, a girl’s gotta do what a girl’s gotta do …
Soundtrack adopts a narrative style wherein the story is interspersed with comments by Bollywood personalities such as Kailash Kher, Anu Malik, Anurag Kashyap and others giving us their views on Raunak Kaul. Not only did the device become tedious beyond a point, it was also slightly irritating because of the effort to lend a false sense of authenticity to the story though we know that Raunak does not exist and therefore, none of these real people could be speaking the truth! There are also repeated references to Raunak’s animosity towards his late father … though we are never quite given to understand the reasons for his feelings. And I suspect that Soundtrack would have been far more hard-hitting than it ends up being if it had taken less time to arrive at the point where Raunak realises that he’s losing his hearing.
But despite all these flaws, Soundtrack is a sweet, small, moving, funny, interesting film. It’s hard to believe that director Neerav Ghosh is a debutant. I love the fact that he does not use graphics in psychedelic colours and shaky camerawork to signify Raunak’s hedonistic lifestyle in the first half of the film. In fact, cinematographer Anshuman Mahaley’s shot compositions are quite unusual – there’s a scene I found particularly interesting featuring Raunak and Charlie seated on bar stools one lazy afternoon. Charlie’s white dressing gown is open from the front, and he sits carelessly with his legs wide apart giving us a clear outline of his groin clothed in technicoloured briefs.
So I’d recommend Soundtrack to you for Rajeev Khandelwal’s excellent acting, his warm chemistry with Ms Khan, the things I learnt while watching Raunak discover ways of overcoming his deafness to become a top-notch musician once again, the beauty of watching him notice sounds all around him though he can no longer hear, its positivity and uplifting tone, and for this message that is one among many quotes from legendary musician Ludwig van Beethoven that appear on screen throughout the film: “The best way to not think of your own malady is to keep occupied.” I guess you know that Beethoven continued to compose music even after he turned deaf. If you didn’t, well now you do.
Rating (out of five): ***
CBFC Rating:                       A without cuts
Running time:                        142 Minutes
Language:                              Hindi
Photograph courtesy: http://en.wikipedia.org/wiki/Soundtrack_(film)