Mod is the official Hindi remake of the Taiwanese film Keeping Watch. The rights have been paid for, and if you don’t find any mention of the original in Mod’s credits, it’s because the makers were not contractually obliged to do so – that’s what I was told when I checked with the producer. 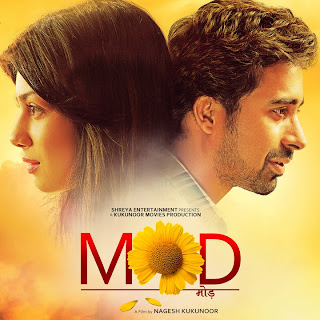 Now that we’ve got that information out of the way, here’s the story: Aranya Mathur (Ayesha Takia Azmi) runs a watch repair shop in the sleepy hill town of Ganga. Her father (Raghuvir Yadav) is a Kishore Kumar fan whose band of musicians goes by the name Kishore Bhakts. Aranya’s mother left the family to pursue her dreams in the city many years back. The only mother figure in the young girl’s life is her aunt Gayatri (Tanve Azmi) who owns a small local restaurant. Hanging around in the shadows is Gangaram who is surreptitiously in love with Aranya. The picturesque town is going through a churn because a construction company is trying to buy up a number of private homes to build a large tourist resort. Into this scenario enters a shy young man called Andy Raymond (Rannvijay Singh Singha) who begins visiting Aranya every day with a watch (the same watch each day) that needs repair. He pays her each time with a Rs 100 note that he’s sculpted into a swan. Who is this man? What is his mysterious past? And what is his connection with Aranya’s childhood? I will leave you to discover the answers if you decide to watch this little film.
One of the nicest things about Mod is the choice of location – not a set piece but a genuinely slumberous small town where you can imagine real people going about their business just the way Aranya, Gayatri, Gangaram and their social circle do. Kukunoor hits the nail on the head with the locale and atmosphere. He also gets the casting of his leading lady right. Ayesha Takia Azmi is pretty, has a likeable screen presence and a natural style of acting. Tanve Azmi is perfect as every young girl’s dream aunt – liberal, fun, yet filled with wisdom. Except for Anant Mahadevan as Andy’s doctor, everyone looks believable here, including Rannvijay as the painfully reticent youngster who has harboured a crush on Aranya for a decade.
What does not work though is the chemistry between the lead pair and the progression of their relationship especially once she discovers the truth about Andy. Does Aranya fall for him because she genuinely likes him for who he is, or because of the lack of romantic options in tiny Ganga, or because she feels sorry for him, or merely because he pursues her relentlessly (he made me feel special in a way no one has before, she tells Gayatri)? I guess because I couldn’t feel that palpable pull between the two of them, I wasn’t convinced about the life-changing decision she takes in the end, apparently for his sake? Was that real love or sympathy … I’m not sure. It was also hard to believe that a girl from a small town where everyone knows everyone else would have forgotten her classmate from school so completely in just 10 years – neither Andy’s name nor his face ring a bell with her even for a moment when they first meet as adults. The music too leaves much to be desired.
Despite these reservations, I’d say there’s more I liked about this film than did not. The warmth between the aunt and niece, the kindly fashion in which the daughter tries to wean her father off the bottle, the attention to small characters such as Gangaram (love the shades of gray in this man) and the gentle manner in which Dissociative Identity Disorder is woven into the story without high drama are touches from the Nagesh Kukunoor we know who knows how to tell real stories about real people. It’s been over a decade since this man made Hyderabad Blues and walked his way into our hearts. That film was low on cash and produced with money collected from friends – the bare-bones budget was evident, but even the resultant tackiness was charming because it was clear that this director had a flair and a passion for storytelling. There have been ups and downs since then. Rockford, for instance, was an agreeable coming-of-age film set in a boarding school, Bollywood Calling was fun though flawed, Hyderabad Blues 2 was unimaginably bad, Iqbal was downright brilliant (one of the best Hindi films made about a person with a disability, shorn of melodrama and stereotypes, sensitive yet entertaining), and Aashayein with John Abraham seemed to be going well until it strayed into awkwardly philosophical territory.
And now there’s Mod. What this film needed was an aching chemistry between the hero and heroine, a desperate desire that would convince us that she would give up her life for him. In the absence of that, it still ends up as a small, sweet, simple, slow moving film that has left me with a pleasant feeling of positivity.
Rating (out of five): **3/4
CBFC Rating:                       U without cuts
Running time:                        120 Minutes
Language:                              Hindi
Photograph courtesy: https://www.facebook.com/#!/MODthemovie

Posted by Anna MM Vetticad at 9:04 AM