Either I’m an emotional coward or I’m a softie. There can be no other explanation for why I postponed for so long this write-up on Dev Anand’s last film Chargesheet. I think my sentimentality and apprehensions both emerged from the second the Navketan logo came up on screen accompanied by the tune of Main zindagi ka saath nibhaata chala gaya which, as you know, comes from one of the legendary actor’s most memorable films, Hum Dono. 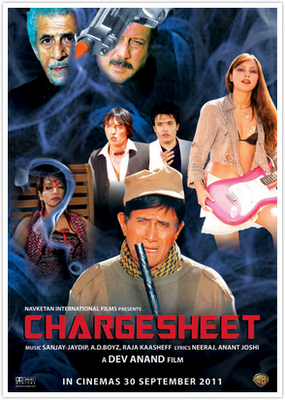 For a logo to conjure up such happy memories, to be followed by a desperately bad film like Chargesheet genuinely hurt. The film is of such dismal quality that I don’t know where to begin. Whatever be the reason, it’s a good thing that people of my mother’s generation had stopped venturing into theatres to watch Devsaab’s films in the past decade since it would have pained them to see this one.

Chargesheet begins in Dubai where a gangster called Sultanbhai (Naseeruddin Shah) is romancing a wannabe actress called Maria. No scene could be a more telling harbinger of things to come than the one in which the don is shown looking down from his window at his moll sunbathing in a swimsuit, while through the sheer fabric of her minuscule outfit we are given a glimpse of one nipple. In that single scene the audience gets evidence of the tragically pathetic quality and the ickiness to follow, since Maria is played by the worst actress possibly in the history of cinema, even the often impeccable Naseer hams to embarrassing effect and there’s more where that transparent swimsuit came from.

The gist of the story is that Sultanbhai finances a Hindi film with the condition that his Maria should be its heroine. The lady travels to India for the shoot where a murder takes place at the hotel the cast is staying in. The needle of suspicion points towards several people since more than one of them had a motive to kill the victim. As it happens, retired Inspector General Gambhir Singh (Dev Anand) is at the same hotel, and he of course will not rest until he solves the case since he is himself implicated in it. Thrown into the mix is an innocent local girl called Chhamchham who earns money as a street entertainer but longs to be an actress, and a waiter at the hotel who loves her but can’t afford to buy her that one expensive lehnga that she covets.

This is an unintentionally funny film for many reasons but most of all because it felt like it was stuck in a time warp. I mean, when was the last time you saw a Hindi film character slap a woman and scream the words “besharam, behaya!”? Well, it happens here. One particular scene is so reminiscent of the old days that it’s stuck in my head forever – Gambhir Singh is close to solving the murder … he is ascending a hill in pursuit of the villain … the background score is gradually rising to a crescendo … the camera takes us to Singh taking a few steps up the slope … then returns to show us precisely that same shot of Singh taking a few steps up that slope … then returns again to that same shot of Singh … and it happens again and again … and again.

The makeup in Chargesheet is so bad that Chhamchham – played by a really bad actress called Devshi Khanduri – has got her face plastered with pancake except for the lower rims of her eyelids which seem to suggest that this is a dark-skinned woman with gorapan slathered on! Politician Amar Singh makes a guest appearance in a role that should forever be a reminder that he did well not to opt for a career in films! The music is so bad that it’s hilarious – if you ever meet me, do ask me to sing for you the title track Chaaaaargesheeet chaaaaargesheet chaaaaargesheet chaaaaargesheet! The policemen don’t lift fingerprints off the murder scene – instead they are instructed to take photographs of every spot on which they suspect there might be fingerprints! But the biggest joke of all is that this film has been distributed by Warner Bros. Why Warner, why?!!!!!

All this would have been highly amusing and nothing more, if the film had not been produced and directed by Devsaab. And so I felt a touch of sadness even as I laughed during the scene in which actress Maria is seated on the floor of a police station, wearing a tiny top with teeny shorts, the camera staying firmly focused on her as she sits there with her bosom barely covered and her legs spread out wide … and then when she leaves the room she does not walk out of the frame but runs right into that dogged, unmoving camera so that her bouncing breasts get larger and larger on screen until all we see is her skin before the next scene comes on.

To be honest, I might have avoided writing this piece completely if I had not promised the readers of my blog (and myself) that I’d review every single Hindi film possible that’s released in Delhi in 2011. And now that I’ve kept my vow, I’ll lay Chargesheet to rest, try to forget I ever saw it and dwell instead on the immense joy I got from watching Devsaab’s Hum Dono with Sadhana and Nanda when it was colourised and re-released as Hum Dono Rangeen in 2011. I wish I could transport you to Delite cinema in Delhi where I watched it, smiling, suppressing that silly lump in my throat that surfaced at the memory of seeing Hum Dono as a little girl with my family on Doordarshan in the days when DD was our primary source of entertainment, and I sang along with Main zindagi ka saath nibhaata chala gaya and Abhi na jaao chhod kar, and cried a little, and then a little more …

Rating (out of five): You know what, let’s just avoid this