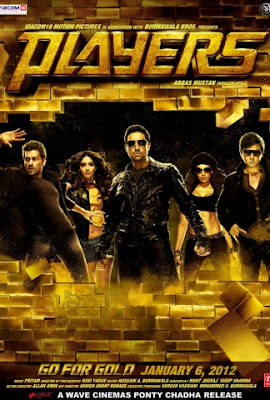 So as it turns out I had fun watching Players. Yeah, I wish it hadn’t lazily glossed over the intricacies of the plots hatched by Charlie Mascarenhas (Abhishek Bachchan) and his troopers. I wish the directors had dumped Pritam’s tuneless songs. I wish some of the acting and dialogues had been better. But the truth is that despite all this, the pace of Players is such that I enjoyed it.
The film, as you know, is the official Hindi remake of the 2003 Mark Wahlberg-starrer The Italian Job which was inspired by the 1969 British classic of the same name starring Michael Caine. It’s the sort of clever heist flick that would appeal to the team who identify themselves rather quaintly as “director duo Abbas Mustan” in their credits. Having entertained us over the years with films such as Baazigar and Race, the “director duo” have begun our New Year with a film that is riddled with loopholes but I still say is basic paisa vasool.
Story: Charlie wants to rob a heavily guarded train carrying gold bars from Russia to Romania. To gather a team of the world’s best crooks for the job, he needs the help of his mentor Victor-dada (Vinod Khanna). The old man has promised his daughter (Sonam Kapoor) that he will not steal again, but the gold could fund an orphanage he dreams of opening, so he agrees. Enter: con artist Riya (Bipasha Basu), illusionist Ronny (Bobby Deol), explosives expert Bilal (Sikandar Kher), wannabe actor Sunny (Omi Vaidya) and computer wiz Spider (Neil Nitin Mukesh). Not a word will I say beyond this about the story, because any word would be a spoiler.
Though the basic storyline of Players comes from the Hollywood film, Abbas Mustan add enough desi ingredients (lowwe, emoshan etc) to make it their own. This is not the sort of film that particularly challenges any actor’s skills, but within the constraints of  the genre and the not-so-sparkling screenplay, I enjoyed watching Bipasha the most, followed by Neil who swings from boyish innocence to villainy to eccentricity in an amusing fashion. Abhishek is best suited to films where he is a suave city boy, but no other director handling him in such a role has got him to ease up in the way KJo did in Kabhi Alvida Naa Kehna. Having said that, the scenes in Players in which Charlie does voice impressions and wears Sunny’s lovingly fashioned mask are handled well both by the actor and directors – far better, in fact, than one such scene in Don 2!
Messrs Deol & Kher stare intensely at us throughout. I expected better of Kher considering the spark he showed even in that lost cause of a film with which he made his debut, Woodstock Villa. And while it’s appalling to see a young actor becoming a cliché with just a handful of films post-debut, in Players Omi Vaidya gets the best lines which he delivers with timing that actually overshadows the otherwise grating repetitiveness of his performance. “Sona kaha hai?” asks a villain desperate to retrieve his gold. “Yahaan bahut jagah hai, jaha bhi sona hai so jaao (or words to that effect),” replies Sunny, in the middle of one of the film’s most intense scenes.
The locations in Players are lovely, and the overall look of the film is slick. But finesse comes from bothering with details … such as the actors playing tiny roles. Vyacheslav Razbegaev makes a thoroughly enjoyable brief appearance as a Russian general with a fondness for sex and Raj Kapoor! But those Indian policemen guarding Victor-dada were a bad joke!
With all these reservations, I still won’t write off Players. Because Abbas Mustan and their screenplay writers Rohit Jugraj and Sudip Sharma give it so many unexpected twists and turns at such an unrelenting speed, that you don’t get much time to think about the gaping holes while the film is on. Q: How did Victordada manipulate matters while in jail to get to a fake hospital with fake staff? Q: Where did the Russians think their general was during the train robbery? Only those of you who have watched the film will understand my questions … my apologies to those who have not. Aur jaise haar kar jeetne waale ko baazigar kehte hai, usi tarah film enjoy karke phir bhi sochne waale ko critic kehte hai! So don’t think too much and you’ll probably enjoy Players in all its loophole-filled glory!
Rating (out of five): **3/4
PS: (1) Love the cars! Dear God, I don’t want gold, I just want enough cash to buy a Morris Cooper. (2) Why does Sonam get higher billing in the credits than Bipasha, though Bips is senior and has a more substantial role? (3) Yes boys, Bipasha does have a standard bikini scene in the film. Yes girls, the scene will make you insecure about your body! (4) For a change I was not put off by Johnny Lever. The episodes involving his firangi wife and servant are borderline racist, but also – I confess – hilarious.
CBFC Rating:                       U/A
Running time:                        160 minutes
Language:                              Hindi
Photograph courtesy: http://en.wikipedia.org/wiki/Players_(film)
Posted by Anna MM Vetticad at 12:54 AM