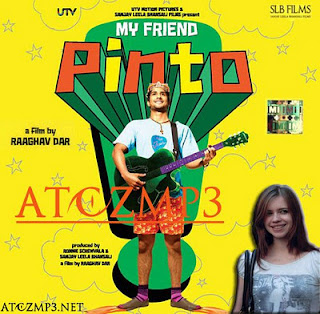 So were we wrong about Prateik Babbar? And by “we”, I mean myself and the countless others who celebrated the arrival of a talented actor when we witnessed his casual, almost lazy style of dialogue delivery in that cameo in Abbas Tyrewala’s Jaane Tu Ya Jaane Na. Then we saw him playing Munna in Dhobi Ghat, the washerman who aspires to be a star. He hit the nail on the head with the character’s emotional quotient though he did come across as slightly too sophisticated for a Mumbai dhobi. But his performance as a student in Prakash Jha’s Aarakshan was a slap in the face of good acting – never before has a young actor appeared as spaced out and disinterested in a role as Babbar was in that film. And now comes My Friend Pinto, just his fifth film (don’t forget Dum Maaro Dum earlier this year) and already there is a sameness to the vocal inflexions and mannerisms that is worrisome.
I guess it’s the same old story – even a talented actor is only as good as the chemistry s/he shares with the director; and sometimes we mistake perfect casting for good acting when a role fits an actor’s personality so well that he is actually just being himself on screen.
My Friend Pinto could have been called One Night In The Life of The Small-Town Simpleton In The Big Bad City. Michael Pinto (Babbar) is a clean, straightforward chap who has lived all his life in Goa. When he loses his mother, he goes off in search of Sameer (Arjun Mathur), once his closest friend who left Goa for Mumbai ages back and has not replied to his letters for a long time. When he gets to Mumbai, his penchant for getting into trouble in unlikely situations kicks in. His kindnesses are returned with cruelty. He helps a bunch of urchins to save a puppy, and they return the favour by picking his pocket. Through a series of coincidences one eventful night, he gets involved with an assortment of colourful characters, all of whom end up at the same climactic New Year’s eve party: Sameer and his wife (Shruti Seth) who are constantly squabbling, a gangster (Raj Zutshi) who is trying to bump off his boss, that boss (Makrand Deshpande) who dotes on his suspicious beloved (Divya Dutta), a hoodlum who fails to see the hell his poor taxi-driver father is going through at the hands of a loan shark, and the pretty dancer Maggie (Kalki Koechlin).
The point the film is trying to make is that Pinto’s simplicity and innate goodness touch the lives of all those he meets, and each of these characters is saved by him in some way. But what could save this lacklustre film? The story is defused and uninteresting (frankly it’s not virtue as much as flukes that work in Pinto’s favour), the storytelling style lacks energy, the music is indifferent, and the few scenes that had the potential to be funny end up falling flat instead. Makrand Deshpande as the Malayali don serves us a hilarious accent when he speaks his own unique Malayali-Hindi dialect, but his role does not move much beyond that. Kunal Ganjawala’s beautiful voice suits Babbar perfectly, but the songs are nothing to write home about. There’s one particular number in which Michael and Maggie are seen splashing about in the rain, and the sound of the water is worked into the orchestration (nice!) but the tune itself is just about okay. The only thread that worked for me in a small way in this multi-strand story is the one involving Sameer and his naïve though career-minded spouse. Arjun Mathur (who we’ve seen earlier this year as a gay gigolo in Onir’s I Am and in the Airtel 3G ad playing a young soldier who phones his wife from a remote location) lends a certain sincerity to all his performances, and we’ll hopefully be seeing a lot more of him in the coming years … but in better films than My Friend Pinto.
Incidentally, this film is produced by heavyweights UTV and Sanjay Leela Bhansali. I wonder why they allowed such dull fare to reach our theatres?
Rating (out of five): *
CBFC Rating:                       U/A without cuts
Running time:                        120 Minutes
Language:                              Hindi