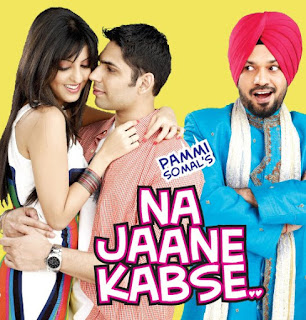 In her second film Na Jaane Kabse, producer-director-writer Pammi Somal carries forward the style she established in her debut release Mummy Punjabi this year. So yes, the film has a certain polish that comes from lovely outdoor locations well shot. But the production issues on other fronts, the poorly developed script, the abundance of cliches about plain Janes and Punjabis, the leading man, the sub-standard dialogues and the veterans in the supporting cast who unabashedly over-act all add up to a film that is really tough to endure.
The story is of Karan whose bride leaves him on his wedding day. He runs off to escape her furious family who are under the impression that he is the one who ditched her, and not vice versa. On the road, he takes a lift from Anjali In Thick Glasses And An Unstylish Outfit. Since the hero repeatedly taunts her for her oily hair, I have to believe him though I couldn’t see any grease. Anyway, it turns out that Karan’s business partner is expecting him to return with a bride since the plan is to promote their new holiday resort as a place so romantic that the owner himself decided to spend his honeymoon there. The international press is waiting! Now what is a man to do?! Well of course he asks Anjali to play his pretend wife. And that’s how their relationship begins.
There’s so much about Na Jaane Kabse that made me cringe, I don’t know where to start. Okay, let’s begin at the very beginning:
I could go on and on. Characters randomly walk in and out of this film. I think I even detected a guest appearance by Ayesha Jhulka, though I don’t know if it can be called that since the actress suddenly appears, vigorously dances to a song, and then just as suddenly disappears from the scene. Most of all I’m keen to share with you a very serious worry. When Na Jaane Kabse ends, the screen screams these words at us: This is just the beginning. Does this mean there will be a Na Jaane Kabse 2? Hai Rabba, problem shuru!